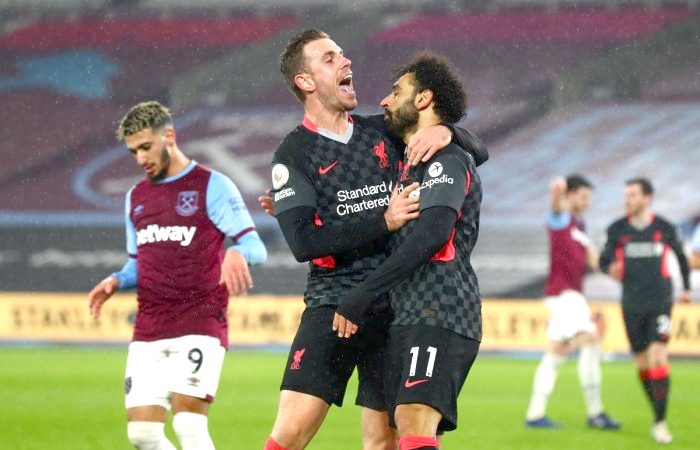 Salah had gone six league games without scoring until he broke West Ham’s resistance in the second half with his first goal in the competition since December.
The 28-year-old followed that fine strike with another eye-catching effort and his masterclass ensured Liverpool made it two successive league wins.
Salah is the first player to score at least 20 goals in all competitions in four consecutive seasons for Liverpool since Ian Rush in the 1980s.
Georginio Wijnaldum grabbed Liverpool’s third as Klopp’s side moved above Leicester into third place.
“What Mo made of Shaqiri’s pass was incredible. The first touch was unbelievable,” Klopp said of Salah’s second goal.
Liverpool are four points adrift of leaders Manchester City, who have a game in hand, and one behind second placed Manchester United.
After five league games without a win, the champions showed signs of emerging from their winter slump in Thursday’s 3-1 success at Tottenham and this was another step in the right direction.
“These boys are a really good group. They’re not happy at not being successful. They always have the right attitude,” Klopp said.
“We spoke about it in the last few weeks and maybe in the last week we have spoken about the right stuff.
“We have found a way to be uncomfortable again for other teams. It was a great game, very professionally controlled against a flying side.”
Liverpool’s previous away league wins this season had come at Chelsea and Crystal Palace and they inflicted more capital punishment on West Ham in their latest trip to London.
West Ham had won their last six games in all competitions and were unbeaten in their last six league matches.
But Liverpool squashed that streak emphatically, proving that the group who swept to the title last season shouldn’t be written off yet.
The Reds are rounding into form just in time for next Sunday’s crucial clash with Manchester City, which is preceded by a home game against Brighton on Wednesday.
Liverpool forward Sadio Mane was absent due to a muscle injury suffered against Tottenham, while Roberto Firmino was left on the bench as Divock Origi and Xherdan Shaqiri started in attack.
With Virgil van Dijk, Joe Gomez, Joel Matip and Fabinho all out injured, Nat Phillips came in alongside midfielder Jordan Henderson in Liverpool’s makeshift central defence.
At least Liverpool’s full-backs remain healthy and Andrew Robertson combined with Trent Alexander-Arnold to set up Wijnaldum for a shot that flashed just over.
Liverpool didn’t manage a single shot on target until first half stoppage-time when Salah’s speculative effort was held by Lukasz Fabianski.
But Salah almost broke the deadlock early in the second half as the Egyptian met Origi’s cross with a close-range shot that was blocked by Aaron Cresswell’s last-ditch challenge.
Leading the Liverpool charge almost single-handed, Salah shot narrowly wide from 20 yards.
Antonio was inches away from putting West Ham in front on the counter, the forward shooting just wide on the turn.
Salah finally ended his drought in the 57th minute as he took Curtis Jones’ pass in the Hammers area and showed typically deft footwork to open space for a superb curler into the far corner.
West Ham had no answer for Salah’s clever movement and he put the result beyond doubt in the 68th minute.
Picked out by Shaqiri’s brilliant long pass into the area, Salah controlled superbly before clipping a clinical finish past Fabianski from close-range.
Firing on all cylinders now, Liverpool struck again in the 84th minute when Wijnaldum capped a flowing attack by tapping in Firmino’s pass.
Craig Dawson’s 87th minute goal, finished from close-range, was little consolation for out-classed West Ham.
‘Sad’ Spurs stunned as Leandro Trossard boosts Brighton

Jose Mourinho admitted his “sad” Tottenham flops “lacked energy” after Leandro Trossard rocked their top four challenge as the Brighton forward sealed a shock 1-0 win on Sunday.
Mourinho’s side were hoping to get back on track after losing to Liverpool on Thursday, but instead they suffered a damaging second successive defeat.
Trossard netted in the first half at the Amex Stadium and, with Tottenham’s Harry Kane sidelined by injury, the visitors lacked the quality to salvage an equaliser.
Tottenham are languishing in sixth place, with just two wins in their last nine Premier League matches.
They trail six points behind fourth placed Leicester, albeit with a game in hand, after only their second defeat in 10 away league games this season.
Mourinho conceded his players were feeling sorry for themselves and couldn’t find the drive to rescue a point.
“We didn’t start well. In the first half I felt the team was probably too sad with the goal conceded and the situation,” Mourinho said.
“There was a lack of energy. In the last 25, 30 minutes they gave everything but of course with some limitations.
“The boys showed great spirit in the second half and showed they are suffering. They tried to fight against that sadness.”
The title bid that looked possible for Tottenham in December is fading fast as leaders Manchester City are now 11 points clear of the north Londoners.
A victory against seventh-placed Chelsea on Thursday is essential to halt Tottenham’s sudden decline away from the Champions League places.
“I have nothing negative to say about them. I leave the game with a good feeling about my boys because they tried hard in the second half,” Mourinho added.
Fourth-bottom Brighton moved seven points clear of the relegation zone after extending their unbeaten league run to three matches.
The Seagulls were the only team in the top four divisions in England without a home league victory this season, but they finally ended that dismal sequence at the 11th attempt.
Gareth Bale was handed only his second league start since returning for his second spell at Tottenham.
The on-loan Real Madrid forward replaced Kane, who suffered his latest in a long list of ankle problems against Liverpool, but once again he failed to impress.
Brighton nearly made the perfect start when Pascal Gross hit the outside of the post after good work from Alexis Mac Allister.
Mac Allister fired over from long range soon after as Brighton’s vibrant start pushed Tottenham onto the back foot.
The hosts deservedly took the lead with a flowing move in the 17th minute.
Mac Allister picked out Gross and his cut back found Trossard for a clinical close-range finish.
Son Heung-min led Tottenham’s first incisive raid when he found Steven Bergwijn on the edge of the penalty area, but the forward dragged his shot wide.
Bale was subdued in attack but the Wales star came in useful at the other end when he nodded clear just as Lewis Dunk’s header was flying towards the top corner.
Mourinho sent on Carlos Vinicius in place of centre-back Davinson Sanchez at half-time.
The on-loan Benfica striker made an immediate impact with a towering leap to meet Bale’s corner with a header that was blocked by Brighton keeper Robert Sanchez.
Tottenham still couldn’t find their rhythm and, after Hugo Lloris saved well from Ben White’s deflected effort, Mourinho hauled off the disappointing Bale and introduced Lucas Moura.
It made no difference and Brighton could have doubled their lead when Mac Allister shot into the side-netting from a tight angle before Neal Maupay headed wide from Solly March’s cross.
Vinicius offered a glimmer of hope with a powerful effort from the edge of the area that Sanchez pushed away, but it was too little too late for spluttering Tottenham. (AFP)