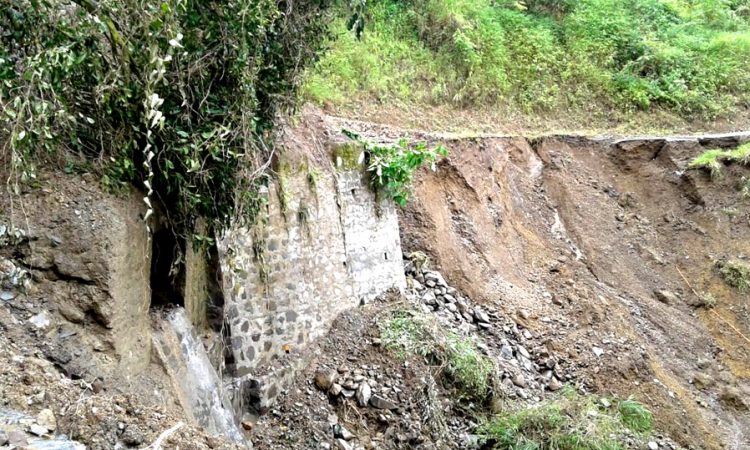 Landslides at NH 202 Shamator to Kiphire

Landslides, floods cut off road connectivity in almost all districts

Dimapur, August 2: Incessant rains continue to play havoc in Nagaland as almost all districts of the state are affected by landslides, damage of roads and floods putting lives of people in danger.
According to reports reaching here today, floods in Dimapur have claimed at least one life in Netaji Colony, who died due to flooding.
Heavy rains have eroded the soil under the retaining walls which has put 2 houses on the verge of collapse.
Landslides have totally cut off Kiphire districts from all other districts and is landlocked now. As per reports Kiphire to Tuensang road has been blocked near Yahi bridge, Kiphire to Zunheboto road has no bridge as it was washed away few years back while heavy landslides in between Seyochung town and Sitimi has cut off communicaton.
Reports stated that Kiphire to Kohima road has been completely washed away at various locations. Kiphire to Seyochung via Amahator road is also blocked. Houses and schools are also affected in Kiphire districts. 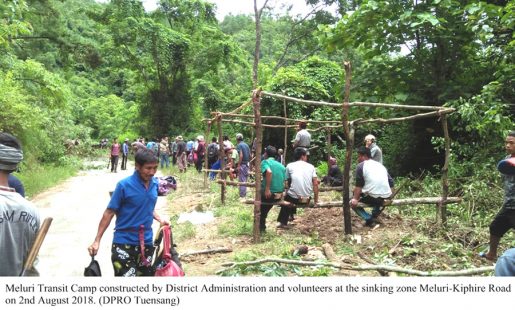 The Government of Nagaland is making all out efforts to reach essential commodities including petroleum products to Kiphire and Pungro area which have been completely cut off during the massive landslides and sinking of portions of roads leading to the district from both Meluri and Tuensang sides.
According to the district administration, Kiphire has food-stock to last for a couple of days and rationing has been imposed for both food and petroleum products.
The Home department has tied up with the Central Ministry of Home Affairs for Air lifting essential commodities to the cut off areas but this operation is hampered by inclement weather and is on standby at present. Department of Food & Civil Supplies are also geared up and has prepared the food grains for transport as and when the air lifting is feasible.
Meanwhile, the officers from the district administration of both Kiphire and Meluri are camped at the spot where a large section of the road has sunk 8 kms from Meluri side and with the help of volunteers have constructed temporary transit camps on either for facilitating manual carriage of essential commodities across the affected area from where trucks can be utilised to transport the goods to Kiphire.
Few goods laden trucks are already reported to be stationed at Meluri while oil tankers are already on their way negotiating via Mao gate towards Meluri with Dobashi guides. More essential commodities are expected to reach Meluri soon.
Volunteers of Association of Off-Road Nagaland with specialized light and medium vehicles have left Kohima this morning en route Meluri to assist in the lifting of essential commodities and petrol/diesel. The officials and volunteers at the side are on standby to guide and assist the off roaders in their humanitarian venture.
While the relief and humanitarian works are in full swing, massive restoration works of the affected highways and districts roads are continuing all over the state. All available machineries and manpower along with volunteers are hard at work overtime in all affected areas.
The IG Assam Rifles has also loaned their two JCBs and bulldozer to assist in the restoration works. Trucks and excavators of the various government departments besides the NPWD have all been pressed into service to mitigate and manage this unprecedented natural disaster in the State which have been triggered by unceasing rains in the last few weeks.
118 houses, 167 families affected in landslides in Kohima 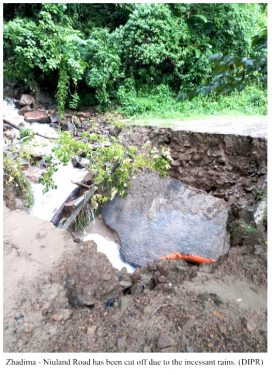 The incessant rainfall for the last few weeks in the State capital had led to multiple landslides and mudslides in several places under Kohima district.
As per the reported records of District Disaster Management Authority (DDMA) Kohima, from July 8 till today, a total number of 118 houses have been damaged, 167 families have been affected, besides a number of roads damaged.
The Kohima DDMA in collaboration with various line departments have been monitoring the affected places round the clock till date to assess the damages, spot verifications and distribution of immediate relief to the affected families in cash or in kind.
The line departments have been involved in restoration and repairing of the damaged roads along with their machineries, manpower and equipments.
For any kind of disaster occurrence, one may contact the given number – 1070 and 0370-2291120/2291122 (State Emergency Operation Centre).
170 houses damaged in Longleng
In Longleng district landslides have occurred in 14-15 places, while nearly 30 households including paddyfields have been affected. Longleng to Yongam, Yongnyah-Nyang road, Yongnyah-Yongshei and Tangsha roads are also blocked by landslides while more than 60 houses have been damaged by landslides and floods.
Longleng to Sakshi road has been blocked for 2 days and more than 40 houses damaged by floods and landslides. In Tamlu, more than 40 houses have been affected by landslides and floods.
NH-2 blocked in Mokokchung
In Mokokchung, NH-2 has been blocked due to landslide at Mongsenyimiti area. Many families have been evacuated at Sangtemla ward between NPF office and DIG residence due to landslide.
While 2 landslides have occurred at Yisemyong and Chuchuyimpang on Mokokchung to Amguri road, Mokokchung to Mariani road has also been affected. Land sinking has been reported at Khensa, Chungtia and Changki, while main road in Artang Ward has also been blocked. Noksen to Mokokchung road has been fully cut off at multiple location.
In Mon, road has been cut off between Ukha and Tobu due to landslides.
In Peren road has been blocked due to landslide at Nzauna, Lalong, Ngam, Old Ngaulong, Old Jalukie Upper and Peren College.
8 houses damaged at Meluri
In Phek, NH-702 Chakhabama to Zunheboto has been blocked due to heavy landslide, while Chouzuba to Kohima road has been totally cut off.
As per reports, Chozuba to Phek via Thuvupisu has been blocked due to landslides. Among the damages, 8 houses have been damaged at Meluri, while paddy fields at Lephori & Reguri village have been washed away, besides landslides damaging terrace cultivation at Upper Khomi village.
19 houses damaged in Tuensang
In Tuensang,9 houses have been fully damaged, while 10 houses are partially damaged, forcing several families to evacuate in various colonies. Way to Elishan sector, Tuensang town; Tuensang to Tobu road has been fully cut off affecting Sangsangnyu, Maksha, Keshai and Hakchang villages. While there are multiple landslides on Shamator-Tuensang road, Tuensang-Chesssore via Shotukor and Y Anner village, landslides and flash floods have damaged large area of Bakha paddy field.
In KC Ward Shamatore town, 200 household have been affected by land sinking.
42 families affected in Wokha
In Wokha, around 25 families in Ruchan village, 8 families in Liphi village and 9 families in Renthan village have been affected. All villages fall under Bhandari. Tchutumdan area of Moilan village on the banks of river Doyang has been inundated. Reports state that Wokha-Bokajan road mudslides continue.
5 families affected in Zbto
In Zunheboto, landslides have affected at least 5 families who have been relocated while 4 houses have been damaged by landslides. Reports state that Kohima to Zunheboto road via Mukali has been severely damaged, while Satakha to Chozuba road has been affected by landslides. Roads have been cut off in Mukali, Pughoboto division.
DC Zbto informs
Deputy Commissioner, Zunheboto, Shanavas C (IAS) has informed that due to incessant rains, the level of streams/rivers may have increased over the past few weeks leading to increase in the volume of water flow and debris flowing under current.
Multiple landslides have also occurred in different parts of the district. He advised the general public not to go for fishing/hunting/picnic etc. nearby streams/rivers during this monsoon season and to exercise precautionary measures so that threat to life and properties are mitigated. (Page News Service)