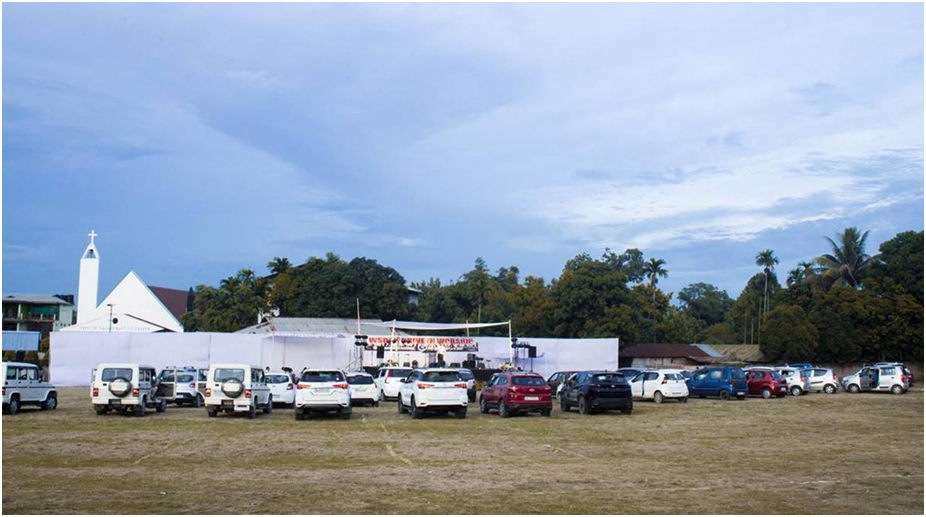 GUWAHATI, SEPTEMBER 22: On September 6, Kakheli Inato Jimomi put on her Sunday best ~ a black-and-red Naga mekhela, a traditional necklace ~ and drove to the playground 2 km from her house with her husband and cousin. As the sun set over the Dimapur sky, she prayed, sang hymns and listened to the sermon ~ seated inside their Bolero, a large pair of Bluetooth headphones around her ears. The 47-year-old said it felt “strange and uncomfortable” in the beginning. But once she saw the familiar face of her pastor at a distance, and the service started in earnest, she felt she was finally at peace.
It had been 6 months since Jimomi last attended church ~ the pandemic and its accompanying social restrictions had brought an unexpected end to a customary ritual she had followed practically every Sunday of her life. So when she learned that a ‘drive-in worship’ was being organised in her village, she signed up immediately. Litaholi S Zalipu, a 32-year-old social worker, was curious too. “We have to be inside a car and pray? How would that work out?”
But as 50 cars filtered into the playground that afternoon, parked in designated slots marked at a respectable distance from one another, Jimomi and Zalipu marvelled at how easily they took to this strange, new way to pray. “The pastor began his sermon by encouraging us to imagine that we were inside a church,” recalled Jimomi, “Somehow, those words of reassurance and the fact that we were seeing him after so long helped ~ we slipped right in.”
With in-person services suspended during the pandemic, many churches went digital (livestream through Zoom, pre-recorded Whatsapp sermons, etc) in the Christian-majority state of Nagaland. “But it was not wholly successful,” said Reverend Dr Phughoto Sema, Executive Secretary of Western Sumi Baptist Akukuhou Kuqhakulu (WSBAK), headquartered in Thahekhu village. “Out of the 168 churches under WSBAK, 140 are in rural areas, where it was difficult to hold online sessions. And in towns, many did not find virtual services very satisfying.” While some churches in rural areas have begun reopening in limited capacity since the first week of September, churches in towns and cities remain strictly closed.
When Reverend Phughoto started preaching in the playground, he felt like he was “in a dream.” “For the first time in my 38-year-long career as a pastor, there were no faces in front of me ~ instead a sea of cars,” he said, with a laugh.
A few days before, Nagaland’s famous musician Alobo Naga had approached him with the idea of “drive-in worship.” “I had already been contemplating alternative ways of getting people together for mass,” said the 64-year-old church leader, “In these times, I sensed that there was a hunger for prayer, for togetherness. I heard Alobo Naga’s idea, it was impressive ~ and thought, why not?”
Naga, a well-known name in the independent Indian music scene, has always had a penchant for unique ideas. A few years back, he launched his music album on a pen drive and his event management company ~ Musik-A ~ introduced Nagaland to the concept of silent discos and silent drive-in movies last year, after he received a large consignment of Bluetooth headphones.
“Of course, those kinds of events were out of the question this year,” said Naga, over the phone from Dimapur, “I first thought of organising a drive-in concert. But then I realised that more than young people, it was the older lot who needed this. Most of them are still scared of stepping out. And that is when the idea of a ‘drive-in worship’ struck me.”
Naga’s drive-in worship sessions limit the number of cars to 50, with a 1-hour service that includes singing, followed by Bible reading and the sermon by the pastor. “Of course, all our volunteers were dressed in full protective equipment and we sanitised everything from the mic to the headphones we were handing out.”
There have been seven drive-in worship sessions, including the first 2 pilot sessions held in collaboration with the Lhomithi Baptist Church and Thahekhu Baptist Church on September 6. “We got such good response that one of our sessions stretched beyond the stipulated 60 minutes to 90 minutes. The people wanted to sing more ~ you see, we had not sung like that…together… in months,” said Naga, adding that the churches are expected cover the transportation costs, while the organisers provided headphones, lights, sound system and the space. A number of churches ~ even from the capital Kohima ~ have reached out to him since.
After his first drive-in service, Reverend Phughoto received a number of phone calls. “At the end of every service, I am used to seeing everyone’s face and can usually tell how they are feeling,” he said, “But this time, all I saw were cars driving off. Later at night, however, I received so many calls. Everyone loved it and wanted us to do more.”
While Jimomi has already attended 2 sessions, Zalipu is looking forward to attending the next. “Praying at home is fine, but worship is a lot about togetherness and community,” said Zalipu, who remembers waving at her friends, from her car window to theirs. “We could not talk to each other but just seeing them after months and knowing that we were praying together made all the difference.” (Courtesy: IE)