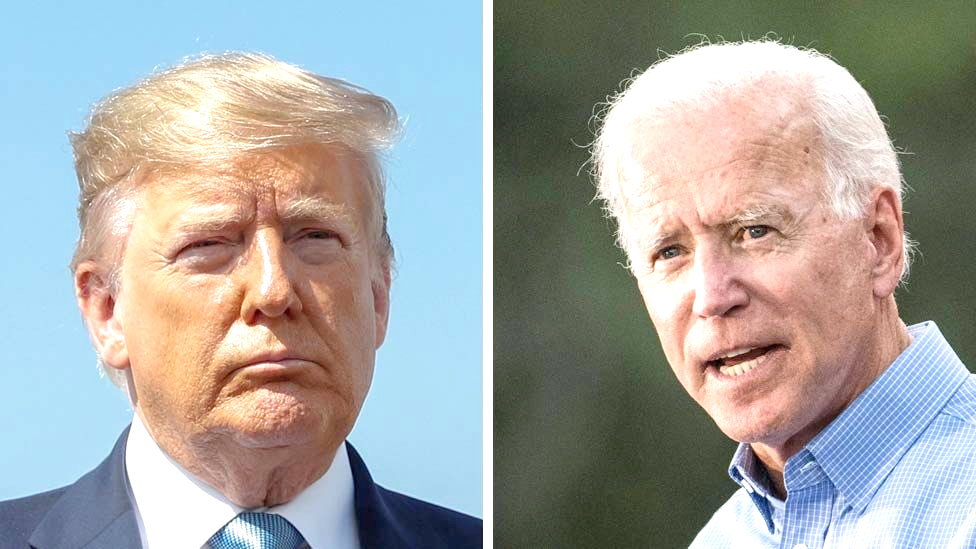 WASHINGTON, September 27: The volatile US presidential election enters a fierce new stage this week when Donald Trump and Joe Biden hold their first debate — a television spectacle finally allowing Americans to witness the two antagonists head to head.
Tuesday’s clash, coming right after Trump defied Democrats and nominated a conservative to replace the late Supreme Court liberal icon Ruth Bader Ginsburg, could again upend an already nail-biting contest.
Biden, 77, leads in polls against the Republican incumbent, both nationwide and in most of the crucial swing states set to provide the decisive electoral college count on November 3.
But Trump, 74, is campaigning hard, criss-crossing those battlegrounds on Air Force One while Biden runs a far lower profile strategy. And with his history of skillful showmanship and brutal debate tactics, Trump is hoping the meeting in Cleveland will put him back on top.
Because of Covid-19 restrictions this has been a mostly long-distance election season. That puts even more weight on the first of three 90-minute debates, where tens of millions of Americans will weigh up two men who
each accuses the other of posing an existential threat to the United States.
Trump sees his nomination of Amy Coney Barrett to the Supreme Court — potentially tilting the court to the right for years — as a fundamental boost to his troubled reelection campaign.
But the live TV debate will be a wild card.
Trump needs to break through the bad news of 200,000 coronavirus deaths, the long-lasting economic fallout, and fatigue among swaths of the country at the constant scandal and upheaval roiling his administration.
And Trump has huge confidence in his prowess on stage.
Yet unlike the fawning treatment he enjoys during his weekly call-ins to Fox News or the adoring atmosphere at rallies, he’ll find himself facing a man painting him as “toxic” in front of the entire country.
“When Joe Biden walks onto the debate stage, it will be the first moment in four years where an American has the opportunity to confront Donald Trump for what he’s done,” Steve Schmidt, a Republican strategist turned
outspoken Trump opponent, said on MSNBC.
Biden, as the frontrunner, mainly needs just to keep steady.
But he’ll be up against a man many would call the best provocateur in the business.
“There is virtually no doubt that Trump will try to bait him,” David Barker, director of the Center for Congressional and Presidential Studies at American University, said.
“Biden does have a history of being thin-skinned, and most of his most memorable gaffes have come when he is responding to a question or comment that has gotten under his skin.”
Trump has spent months denigrating Biden’s mental state.
He says the former vice president is “shot.” He questions whether Biden took drugs to boost his performance during the Democratic primaries.
Biden, though, has been through the crucible of the Democratic primary debates earlier this year. He’s also been making a string of generally well received speeches on the campaign trail.
Trump comes with his own weaknesses.
Although he often takes questions from groups of journalists, it’s rare that he’ll do the more risky one-on-one televised session with a tough interviewer. Neither has he had to debate an opponent face-to-face
since Hillary Clinton back in 2016.
“Normally, that first debate is the toughest for the incumbent,” said Aaron Kall, director of debate at the University of Michigan and co-author of “Debating The Donald.”
“When you are the president, you are kind of in a bubble and historically that first debate usually goes better for the opponent.”
In the days leading up to the Cleveland clash, the Trump campaign has been busily trying to reset expectations, suddenly painting Biden as a master performer.
“We have to be prepared for the tuned-in Joe Biden,” Trump’s campaign communication chief Tim Murtaugh said.
The debate moderator, Fox News host Chris Wallace, has set topics ranging across several of the most explosive political and social issues in the country:
– The Trump and Biden records.
– The Supreme Court, which Trump intends to shift to the right for a generation on election-eve by nominating conservative judge Amy Coney Barrett as replacement for the late justice Ruth Bader Ginsburg.
– The Covid-19 health and economic disasters.
– Race relations and urban violence.
– The integrity of the election, which intelligence agencies say is being undermined by Russia in particular, and which Trump claims will be “rigged” by Democrats.
Whether Wallace can keep both men moving along, however, is an open question. (AFP)

Trump demands Joe Biden to take drug test before or after Tuesday debate
US President Donald Trump demanded Sunday that his Democratic rival Joe Biden take a drug test either before or after the pair’s first debate on Tuesday, in his latest salvo against his opponent’s mental acuity.
“I will be strongly demanding a Drug Test of Sleepy Joe Biden prior to, or after, the Debate on Tuesday night,” Trump tweeted.
“Naturally, I will agree to take one also. His Debate performances have been record setting UNEVEN, to put it mildly. Only drugs could have caused this discrepancy???” he continued, without offering any evidence for the claim.
According to US media reports, on Saturday their teams finalized the conditions for the debate, to be moderated by Fox News reporter Chris Wallace, including forgoing the traditional handshake and with only a small audience due to Covid-19 restrictions.
The condition of a drugs test was not mentioned.
Both septuagenarians are prone to blunders and gaffes when speaking.
But the 74-year-old Trump has spent months denigrating 77-year-old Biden’s mental state, and suggested several times in recent weeks without any evidence that the former vice president may be using unspecified drugs to boost his performance.
For the most part Biden has shrugged the accusations off, calling for voters to observe the two men together.
“Watch me. Look at us both,” he said in an August interview with ABC.
On Saturday Biden said he expects “personal attacks and lies” from the president during the debate, likening Trump to Nazi propaganda chief Joseph Goebbels.
Tuesday’s clash in Cleveland, Ohio, the first of three 90-minute debates, represents the first time voters will have the chance to see the candidates facing off against one another directly. (AFP)