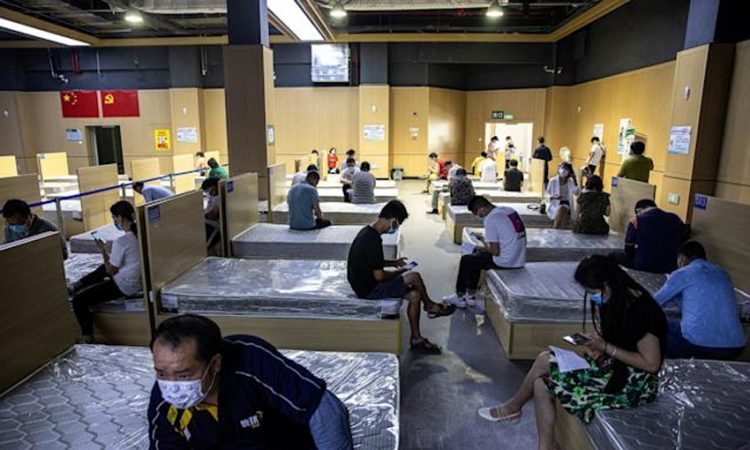 BEIJING, JUNE 14: As the delta variant of the Coronavirus spreads in southeastern China, doctors say they are finding that the symptoms are different and more dangerous than those they saw when the initial version of the virus started spreading in late 2019 in the central city of Wuhan.

Patients are becoming sicker, and their conditions are worsening much more quickly, doctors told state-run television Thursday and Friday. Four-fifths of symptomatic cases developed fevers, they said, although it was not clear how that compared with earlier cases. The virus concentrations that are detected in their bodies climb to levels higher than previously seen and then decline only slowly, the doctors said.
Up to 12% of patients become severely or critically ill within 3 to 4 days of the onset of symptoms, said Guan Xiangdong, Director of Critical Care Medicine at Sun Yat-sen University in the city of Guangzhou, where the outbreak has been centered. In the past, the proportion had been 2% or 3%, although occasionally up to 10%, he said.
Doctors in Britain and Brazil have reported similar trends with the variants that circulated in those countries, but the severity of those variants has not yet been confirmed.
The testimonies from China are the latest indication of the dangers posed by delta, which the World Health Organization last month labeled a “variant of concern.” First identified this spring in India, where it was blamed for widespread suffering and death, Delta has since become the dominant variant in Britain, where doctors suggest that it is more contagious and may infect some people who have received only 1 of 2 doses of a COVID-19 vaccine.
China has uniquely detailed data, however, because it has essentially universal testing in the vicinity of outbreaks, allowing officials to gather detailed information on the extent of cases.
Delta’s spread in southeastern China focuses more attention on the effectiveness of China’s self-made vaccines. Chinese authorities have not indicated how many of the new infections have occurred in people who had been vaccinated. In some other countries where Chinese-made vaccines are in wide use, including the Seychelles and Mongolia, infections among vaccinated people are rising, although few patients have reportedly developed serious illness.

Nearby Shenzhen had a handful of cases last week of the Alpha variant, which first emerged in Britain.
As some other parts of the world still struggle to acquire and administer large numbers of Coronavirus tests, southeastern China has used its local production of scarce chemicals to conduct testing on a remarkable scale. Authorities said that they had conducted 32 million tests in Guangzhou, which has 18 million people, and 10 million in the adjacent city of Foshan, which has 7 million.
Guangzhou has also isolated and quarantined tens of thousands of residents who had been anywhere near those infected. The testing and quarantine appear to have slowed but not stopped the outbreak. China’s National Health Commission announced Friday that 9 new cases had been found in Guangzhou the previous day.
“The epidemic is not over yet, and the risk of virus transmission still exists”, said Chen Bin, Deputy Director of the Guangzhou Municipal Health Commission.
(Courtesy: New York Times)