Sign in
Home Top Stories In 2019, BJP will return to power with a bigger mandate : Amit Shah

In 2019, BJP will return to power with a bigger mandate : Amit Shah 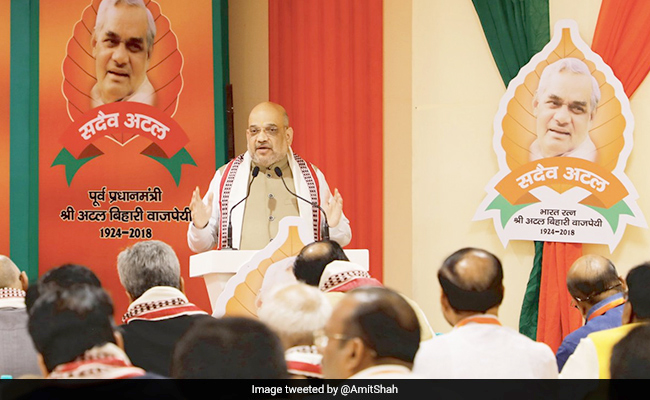 New Delhi, September 8: Bharatiya Janata Party (BJP) president Amit Shah, who will lead the party in the 2019 general elections, on Saturday said that the Narendra Modi government will sweep back to power with a bigger mandate, while dismissing the proposed opposition grand alliance as an “eyewash” and asking party activists to counter its “misleading” attacks on the economy.
In his address on the opening day of the two-day meeting of the BJP national executive, Shah said the party would win next year’s Lok Sabha polls with a mandate bigger than 2014, when it bagged 282 seats out of 543, due to the Modi government’s record, as per Union minister Nirmala Sitharaman.
Meanwhile, before the crucial meeting in which the party will brainstorm on its strategy for the coming assembly elections in Madhya Pradesh, Rajasthan, Chhattisgarh, Mizoram and possibly Telangana, there was a separate closed-door deliberation of national office bearers and state presidents where it was decided that Amit Shah, whose term is till January, will stay in the post till the 2019 general elections. It was also decided that organisational elections will also be postponed.
Briefing the media on the first day of the meeting, Sitharaman quoted Shah as saying that the 2019 polls will be fought on the basis of the achievements of prime minister Modi, who leads the party, unlike former prime minister Manmohan Singh who merely follows his party, and the strength of the BJP organisation.
The BJP chief expressed confidence that the partywill easily win the 19 states where it is in power and benefit from the anti-incumbency factor in states like Bengal, Odisha and Telangana where it is in second place . He said the party will perform well in Andhra Pradesh and Tamil Nadu too.
Listing the several pro-people policies of the Modi government, he asked activists to inform the people of them while challenging the “misleading” attacks of “(former Union finance minister) P Chidambaram and company”.
Attacking the opposition for being in denial mode and displaying its frustration in Parliament, he cited the case of the no-confidence motion it had brought, despite absence of the two key conditions – the government losing its majority or widespread public discontentment against the government.
Asserting the Modi government is working for “making India”, he accused the Congress of working for “breaking India”, she said.
Shah also said that the opposition “Mahagathabandan” won’t make any difference as it is built on “lies” and will flop in the coming elections. Terming the proposed alliance a “facade”, and an “eyewash”, he said it comprised parties that the BJP had defeated one after the other in the 2014 general elections and after.
On the National Register of Citizens (NRC), recently implemented in Assam, Sitharaman quoted Shah as saying it will be so operationalised to ensure that not even one more infiltrator can enter India now.
Supporting the Maharashtra government and chief Devendra Fadnavis on the arrests of five lawyers and activists across India for being involved in Maoist groups and the violence in Pune earlier this year, Shah rapped the Congress for playing “vote-bank politics” on the issue of “urban Naxalites”.
Sitharaman also said that Shah mourned the absence of late former prime minister Atal Bihari Vajpayee, who was one of BJP’s founding members, in the first executive meeting after his death, saying that the void he left could never be filled.
She said that Shah had also spoken about the devastating floods in Kerala and elsewhere and asked all sections to help in relief and rehabilitation of the affected people.
Later, the agricultural resolution was passed at the meeting. Briefing reporters, Madhya Pradesh chief minister Shivraj Singh Chouhan said it maintained that the party should treat as a mantra prime minister Modi’s vision of doubling farmers’ income by 2022.
It also resolved to ensure every farmer had access to irrigation for his fields, called for linking of rivers and praised the government’s measures to increase soil health. It also lauded the Modi government for reforms in procurement of crops and ensuring farmers a higher minimum support price. (Agencies)