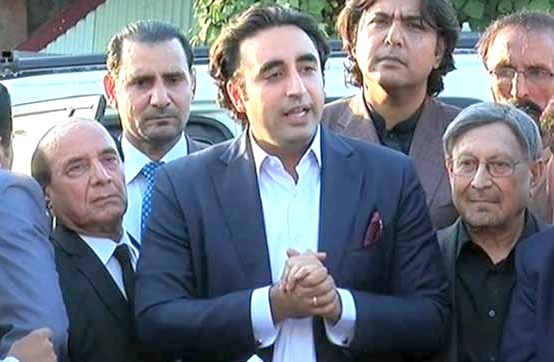 GILGIT-BALTISTAN, October 29: Pakistan Peoples’ Party (PPP) chairman Bilawal Bhutto Zardari on Wednesday insisted that Imran Khan-led Pakistan Tehreek-e-Insaf (PTI) government would be sent packing by January 2021, and a ‘people’s government’ would take over.
While addressing a public gathering at the main Skardu Bazaar as part of the party’s campaign for the GilgitBaltistan Assembly elections in November, Zardari said that today every section of the society was protesting against the PTI government, further pointing out that GB had not yet become a separate province, but the PTI government at the centre had already imposed taxes on the region’s people, reported Dawn.
He also declared that the campaign for the right to rule and right to property belonged to the PPP.”PPP is the only party which included the demands of people of Gilgit-Baltistan in its manifesto for elections in Pakistan in 2018,” Dawn quoted him.
He went on to say that PPP was the only party advocating that people of GB should have their own province, representation in the Senate and the National Assembly of Pakistan. The PPP chairman also warned that his party won’t allow stealing of votes in Gilgit-Baltistan.
He stated that it was unfortunate that the ‘tyrants’ had snatched Shaheed Zulfikar Ali Bhutto, Shaheed Shahnawaz Bhutto, Shaheed Mir Murtaza Bhutto and Shaheed Benazir Bhutto from the people.
“I have gone to the smallest town and village in Gilgit-Baltistan and seen that Bhutto is alive at all those places,” Zardari declared.
Thousands of PPP workers from across the Baltistan division had shown up in the meeting.Former Gilgit-Baltistan governor and PPP central leader Qamar Zaman Kaira, former chief minister Mehdi Shah, PPP GB president Amjad Hussain Advocate and Sadia Danish were also present on the occasion.
Along with moving ahead with its plan to make Gilgit-Baltistan as its province, Pakistan is also planning to hold elections to the so-called Gilgit Baltistan legislative assembly on November 15. (ANI)