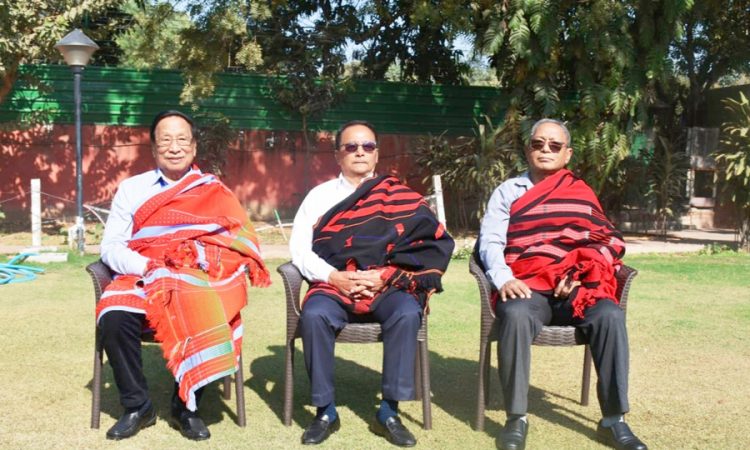 DIMAPUR, DECEMBER 15: The NSCN (IM) has made it clear that imposed solution or solution with “an unmandated group of people who don’t represent the issue of the Nagas” is not acceptable to the Naga people.

Addressing the winter parliament session of the NSCN/GPRN on Tuesday, Yaruiwo Q Tuccu stated that Naga politics is about sovereign power that makes and unmakes things and makes and unmakes laws.
“It is about sovereign power that will develop the Nagas materially, mentally and spiritually; it is about rebuilding psychology of the Nagas – young and old, male and female damaged by the bloody war; it is about rebuilding the reconnecting the damaged relationship with our neighbours; it is about building a new relationship with the Indian and Burmese people for a lasting harmonious and peaceful co-existence as unique entities. And above all, it is about rebuilding the broken faith of the Nagas through the Church,” he said.
Maintaining that every kingdom or state is the product of decision of people, Tuccu said freedom to decide the future of a people by themselves is their inherent right. “We cannot imagine a government of a people without freedom to run it according to their sweet will and decision. In keeping with the spirit and letter of the Framework Agreement it is reiterated in the competencies stating, “In matters of her own affairs as mutually agreed upon, Nagaland shall be sovereign,” he stated.
The NSCN (IM) chief said the Naga people have been looking for their long-cherished solution, a solution that protects their sovereign right, their future, their history, their territory, their identity, their culture, their religion and their state. But they (Nagas) are strongly opposed to any kind of military solution or solution through coercion, he said.
“The Naga people have rejected the past accords imposed on them. Definitely, they are for solution that is arrived at through mutual agreement. Therefore, imposed solution or solution with an unmandated group of people who don’t represent the issue of the Nagas is not acceptable to the Naga people,” he asserted.
Tuccu stated that after a series of negotiations for 18 years, the historic Framework Agreement was officially signed between the Government of India and the NSCN on August 3, 2015. “This FA is the meeting point for the Indians and the Nagas. This Framework Agreement is based on ‘equality and mutual respect’ and the recognized unique history of the Nagas. This is the Magna Carta of new relationship of the two people. We will always stick to the Framework Agreement and abide by it,” he iterated.
On why early solution is being delayed, he asked, “Is it because of Naga factor or Indian factor? I can say the ball is in the court of GoI. But why the hearts of the Indians leaders are hardened? Is it because of the wrong perspective of the Indian leaders on Naga issue or sin of broken faith of the Nagas? Early solution or delayed solution is not the point, but issue-based solution is the point that matters,” he insisted, while reminding that the past accords could not bring solution because they were not issue-based.
Stating that Naga people have reason to give thanks to Indian Prime Ministers PV Narasimha Rao, Inder Kumar Gujral, HD Deve Gowda, Atal Bihari Vajpayee, Lal Krishna Advani (Deputy PM), Dr Manmohan Singh and Narendra Modi and Naga leaders, Isak Chishi Swu and Th Muivah, who have laid down the foundation for solution to the Indo-Naga political problem, the NSCN (IM) Yaruiwo said, “This Framework Agreement is the end result of their committed efforts. I believe solution is not far off if it is worked out in keeping with the spirit and letter of the officially agreed Framework Agreement.”

On the occasion, Tuccu paid homage to those martyrs for the cause of “Nagalim for Christ”, saying they were martyred, not killed. “Martyrs are seeds that germinate and bear fruits a hundredfold.” He also gave revolutionary salute to all NSCN members who have been in the forefront of the resistance movement with full conviction and faith for decades.
“History knows how NSCN members faced turbulent storms of the enemies’ aggression and survived from them by His grace. Indeed, NSCN is a proven Naga national organization. Acknowledging that fact, Mr PV Narasimha Rao, the then Prime Minister of India said, “You have proved yourselves”. I believe every member of NSCN today is still a hard nut to crack,” he added.
(Page News Service)