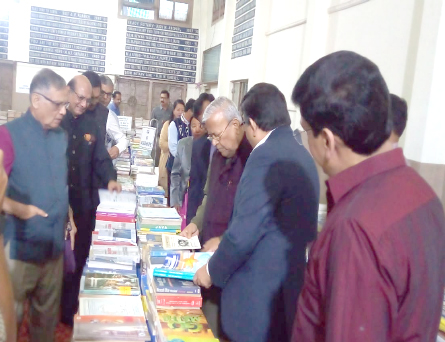 Dimapur, November 13: Former Governor of Nagaland PB Acharya today unveiled the Rotary Club Dimapur Hearse Van (dead body carrying van) which was dedicated to the people of Nagaland and also inaugurated the exhibition of the Mission Million Books at the Rotary Centre, Midland, PWD road, Dimapur today.
Speaking as the chief guest at the unveiling program, former Governor PB Acharya exhorted the Rotary Club Dimapur for their humanitarian service towards the people of the state.
He said, “I am happy to be amongst the people of Nagaland who are always close to my heart”.
On Nagaland, he said it is a small state with lovely people.
“I always believe if poverty is to be eliminated than education is the only mantra, poverty is not a disease. Education is the basis of eliminating poverty,” he said.
Nagaland should not consider itself backward, it is rich in natural resources. The backward tribes of Nagaland should no longer say that they are backwards. Backward is a thought and people should come out of backward thoughts, PB Acharya said.
India is rich but Indians are poor, Nagaland is rich but Nagas are poor, the former governor said explaining his concept that knowledge should not be contaminated and an achiever who cannot achieve for the country is a loser and to contribute towards the growth of the nation everyone needs to change their mindsets and deliver for the welfare of the state and the nation.
He said, “Our greed for money destroys the value of life. Knowledge is at your feet, use the best of it and added academic studies will not take you anywhere, entrepreneurial studies takes people wherever they wish”.
Acharya said Naga political issue is about to be resolved and it is happening due to the resolute leadership of PM Narendra Modi who is eager to end the long drawn war and further stated that once Nagaland becomes peaceful, the whole of north east will be at peace.
Empowering the powerless should be our agenda in life, the former governor said.
Chief editor of Nagaland Post, Geoffrey Yaden speaking as the guest of honour appreciated former Governor PB Acharya stating that he is more than the people’s governor whose heart is here in the north east and since 1960’s he had been serving the people of the state.
” Former Governor PB Acharya is a friend of the North East people”, Geoffrey Yaden said which was received with loud applause from the gathering.
Many Rotarians and guest speakers spoke on the occasion appreciating the donation of books to the Rotary Club Dimapur by the chairman of Ratna Nidhi Charitable Trust Rajiv Mehta who was also present in the programme and spoke on many charitable works initiated by the Trust.
(Page News Service)