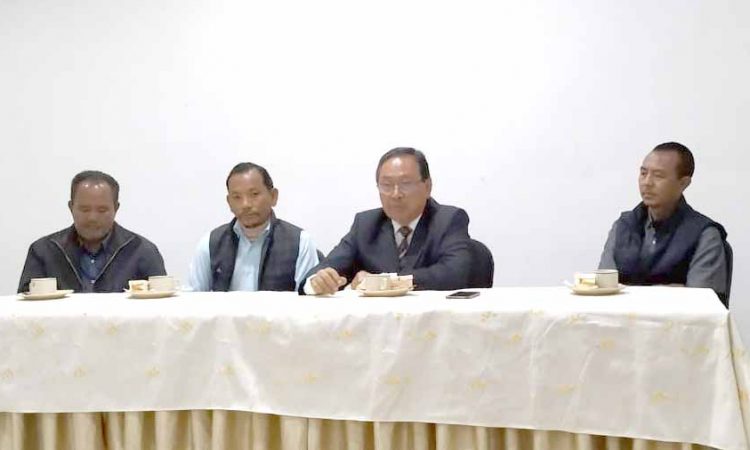 Dimapur, February 2: The Nagaland Pradesh Congress Committee (NPCC) on Sunday threatened to call a state-wide bandh if the Government of India and the Government of Nagaland fail to implement the political solution, achieved on the conclusion of talks on October 31 last year, within ‘a reasonable time.’
“We’ll protest in the form of civil disobedience,” said NPCC president K Therie while addressing a press conference here. He said the party won’t let the Government function.
Therie informed that the party took the resolution on January 17 to press both the Centre and the State Government to implement the solution, and submitted the resolution to the Governor on January 22.
We don’t see a reason why it cannot be implemented, he said.
Therie said it is the duty of a democratic Government to honour the aspirations of the stakeholders, and yet the people and the workers of the Naga National Political Groups are being kept in suspense without a reason. He demanded that the solution be implemented without delay under a non-partisan Government to ensure justice and equality.
Since the regional political parties had promised to pave way whenever the solution is achieved, he hoped the parties would stand by their own commitments.
CAA
On Citizenship (Amendment) Act (CAA), Therie said it is going to submerge Nagas within two decades in the ocean of bigger communities and religions which was “feared even by our ancestors”.
Calling CAA against the spirit of secular constitution, he said it divides the nation on the basis of religion and this will remain as long as the Act is not removed from the constitution.
Therie said that Nagas have been conserving the indigenous customs and cultures for over 90 years, but the Act is going to overpower the Nagas like the case of Tripura.
‘Toothless MLAs, MPs’
Taking on the 60 MLAs of the State, Therie alleged that the MLAs have become toothless and failing to safeguard the people, and though Congress doesn’t have a single MLA or MP, and people might not be expecting much from the party, it will continue to fight and defend the people from the “reign of terror”.
Alleging that the 60 MLAs have nothing more to think than collecting development funds, repay loans, and collecting funds for the next election, he claimed some of the MLAs have openly expressed that even if they carry out developmental works in a holistic manner, still, no one is going to vote for them in the next election. “Corrupt money can only save them as people of Nagaland have accepted bribe and corruption as a way of life,” he said.
People in Government think only one political party is the Government and thus carry out nepotism and manipulation without hesitation, he alleged.
Therie observed that people now don’t see sudden surge of money as corruption but regard it as wisdom, and keep electing people who cannot even build the roads of their own constituencies and thus the State has become no place for the God fearing kinds who want to diligently work for the society.
He claimed that the voice of the people is no longer the tallest order for the Government, and everyone knows why.
Patton’s statement
On a question regarding the recent controversy relating to a statement of Deputy Chief Minister Y. Patton, the NPCC president commented that the party doesn’t have much to say about it as people need to realize what is happening and “it is a shameful comment on the Dy CM’s part”.
He added that the Congress had fought in the elections and “nobody bothered to vote for our candidates” and made a party win which didn’t have even a manifesto while Congress had a manifesto ready. (Page News Service)