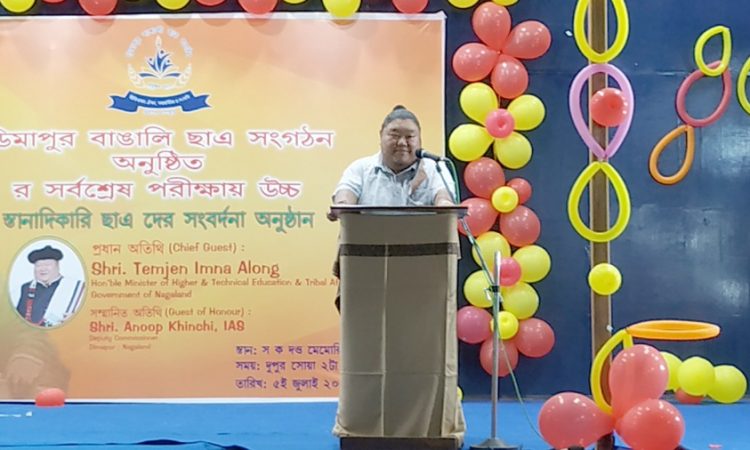 Dimapur, July 5: Minister for Higher & Technical Education and Tribal Affairs Temjen Imna Along on Sunday asserted the need to think about placements of not just Nagas, but also non-Nagas, who call Nagaland their home.
He was speaking as the special guest at the 4th annual felicitation programme of HSLC and HSSLC toppers, organized by Dimapur Bengali Students’ Union here at St. Mary Montessori Hr. Sec. School, Dimapur.
While refraining from making any definite and immediate comment on the remark made by the NPF Minority Wing president Bishnu Bhattacharjee that the State Government should think about non-Naga students who cannot appear in any entrance exams, the minister agreed with Bhattacharjee that the time has gone when the talk would only have to be about Nagas. He, however, maintained that Nagas population is small and there are certain things that need to be protected.
He said it has become important to remove the walls of confinement in the way Nagas think, as even when people from Nagaland go out of the State, they prefer to stay together and would not be comfortable to adapt to the different foods, and though it might take years, the change has to come.
Acknowledging the contributions of the Bengali community to the progress of the State, he said people of Nagaland will have to work together for a future where, beyond the walls of divisions, everyone will dream and aspire together.
He also proposed on the occasion that instead of there being a Dimapur Naga Students’ Union, it would be great if there is a Dimapur Students’ Union.
Earlier, Bishnu Bhattacharjee, who is also the DBSU Advisor, asked the students to work hard, knowing that they have a challenging future, and make their families and nation proud.
DNSU president Sedevilie Angami said he was impressed by the hard-work and performances of the students and congratulated all the successful candidates. Dimapur Bengali Samaj president, KK Paul also addressed the gathering, which included a limited number of persons in the venue due to the ongoing pandemic. The programme was live-streamed so that those who could not be accommodated in the venue could still be a part of it.
Altogether, 12 students were felicitated in the programme. This year, there were also two new awards namely Late Chandan Mazumdar Memorial Award, which was awarded to Abhi Chakraborty (first rank holder, HSLC) and Late Ashutosh Paul Memorial Award which was awarded to Anushka Bhattecharjee (first rank holder, HSSLC, Science).
Besides these, Temjen Imna Along also gave Rs 3,000 to each of the toppers as well as Rs 50,000 to the union while Bishnu Bhattecharjee gave Rs 5,000 each to the two Bengali subject toppers.
(Page News Service)