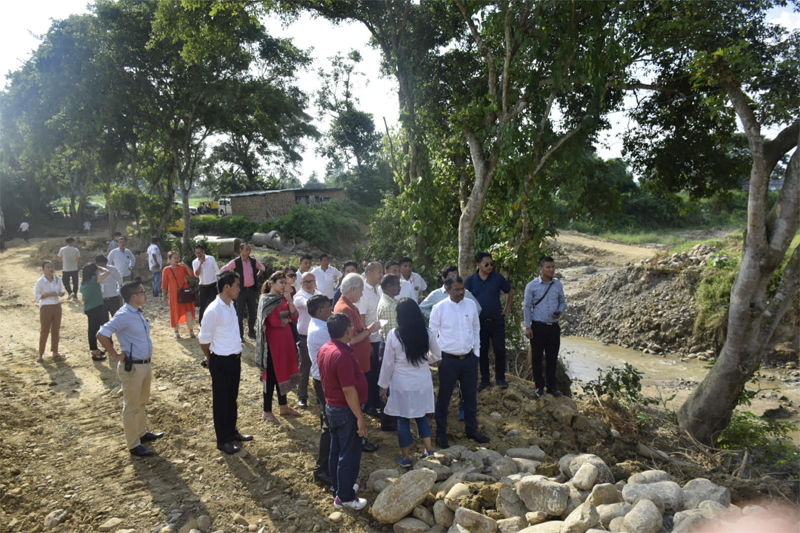 Dimapur, September 4: A 5-member Inter Ministerial Central Team arrived Dimapur today for assessing the disaster areas in Nagaland.
The team comprising of Joint Secretary (FFR) MHA, K.B.Singh ( team leader), Director incharge, Department of Agriculture and cooperation, Kolkota, Dr. K Manohoran, Consultant FCD, Department of Expenditure, New Delhi, R B Kaul, Anirban Acharya from the Ministry of Road and Transport and Highway Guwahati and Chahat Singh from the Department of Rural Development, New Delhi visited Niuland sub division and interacted with the affected farmers of Niuland and bordering villages during which the farmers narrated the extent of crop damaged, landslides and blockages of roads caused due to incessant downpour during the last part of July and first week August this year.
The team also visited Yeveto Village to take stock of the ground reality of the damages caused to plantation and crops due to the change of river course.
On the way to Niuland, the team stopped by at the Balijan bridge connecting Niuland and Dimapur which has been completely washed away.
Later in the evening, while briefing the IMCT members at Niathu resort, Deputy Commissioner Dimapur, Sushil Kumar Patel (IAS) apprised them about the extent of damages under Dimapur district with pictorial presentation and highlighted on the infrastructural damages, deaths, number of pucca and kutcha houses damaged, overview of difference in wayer level, landslides and sinking areas, rescue operations undertaken, relief given, relief shelter/ camps etc.
Tomorrow, the team would be proceeding to Ralan and Bhandari areas under Wokha district to see the major damages after which they would proceed to Wokha and have a short meeting. Later, the team would be proceeding towards Kohima and see the major landslides in and around Kohima district. (Page News Service)