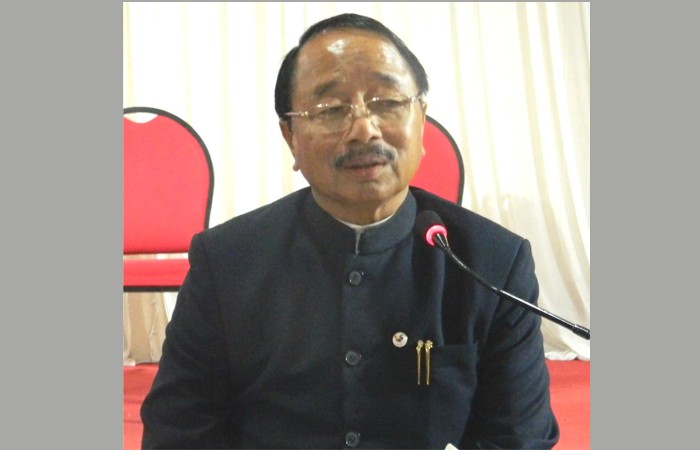 Kohima, March 13: Having been compelled to sit in the opposition bench after 15-years of rule, the Naga People’s Front (NPF) today emphasized on the need to have a strong stable Government in Nagaland to facilitate an amicable solution to the vexed Naga political issue.
“A fragile coalition government in the State cannot be expected to withstand any political or social repercussion of bringing about resolution to the Naga political issue, set aside developmental aspects,” said former minister and consecutive four-time MLA, Imkong L Imchen while interacting with media persons after the adjournment of first day of the newly established 13th Nagaland Legislative Assembly.
The Naga political issue and its settlement has been so dear to our Naga people for the last several years and therefore NPF party thought it imperative that the election to the 13th NLA be postponed in order to work for the solution and settlement of the Naga issue, which was also rightly endorsed by the Naga people, he said.
However, the Government of India (GoI) thought that even though election is conducted solution to the Naga issue will not be impacted.
The NPF party, he said, is grateful to the Naga people for giving their mandate. “Even though the party could not secure absolute majority in the House, the voting percentage NPF has secured is the highest. We shall ever remain grateful to the Naga people,” he said.
Imchen went on to state that “the Naga political dialogue which has been put on halt during the electioneering process will resume and we are expecting that solution will be forthcoming sooner than later”.
The initiative taken by the Prime Minister Narendra Modi has been highly appreciated and there is no reason why we should doubt his determination to offer a solution to the Naga people, he said, adding “we will all be expecting early settlement of Naga political problem”.
“I personally feel that Modi will be succeeding to bring about a solution to the long pending NPI, even where Jawaharlal Nehru and Indira Gandhi have failed,” he said.
Affirming that the NPF shall stand firm in its support to the ongoing political dialogue to bring about a resolution and amicable settlement, Imchen said the NPF even though we will be in the opposition bench, has the strength of 26 members in a House of 60 and therefore will not leave any stone unturned to contribute wherever required.
“Election to the State Assembly is a regular feature once in every five year, so it is a normal process as per the Constitutional provisions, but bringing about solution of the NPI cannot be a normal feature,” he said.
These are two parallel dimensions and NPF has every reason to stand for the solution of Naga political issue, he said.
In this, the former minister said, “NPF welcome any honourable member of the House desirous of bringing about a political resolution of the Naga issue”.
“Together we shall endeavour to facilitate the ongoing political dialogue between the GoI and Naga negotiating parties,” he said.
Asked whether any approach has been made to pull in other political parties in the formation of NPF government, Imchen said, “we are in the process of new political formation but officially we have not offered nor invited any political parties so far”.
“We had pre-poll alliance agreement with JD(U) and NPP, but today they have decided to join PDA government led by NDPP without revoking our agreement, the same yardstick applies to the BJP,” he said.
Even though they (BJP) entered in electoral seat arrangement with NDPP, our alliance with them is still maintained and we have not reacted on their decision to go with electoral seat adjustment with NDPP till today, he quipped.
Meanwhile, on the stand of NPF towards NSCN(K), Imchen said “NPF has been requesting them to join the negotiations while former Chief Minister T R Zeliang has already written two-three letters but there have been no response from NSCN(K)”.
(Page News Service)