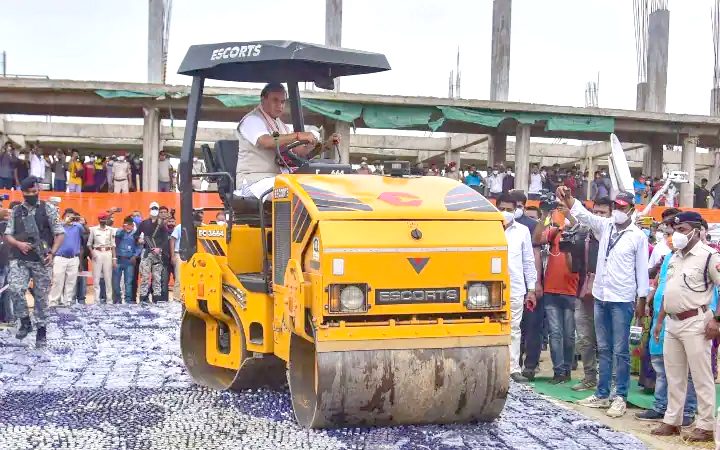 Guwahati, July 18: Highlighting that trade in illegal drugs in Assam is worth about Rs 5,000 crore annually, Chief Minister Himanta Biswa Sarma Sunday urged the police to be unrelenting in their war on drugs.

He also emphasised the need for proper rehabilitation of reformed drug addicts and directed the Health and the Social Welfare departments to work together in this regard.
“Drugs worth Rs 163 crore were seized between May 10 to July 15 this year. If this is, say, 20 per cent of the drugs which are being trafficked through the state every month, the trade in illegal drugs in Assam would be of at least Rs 5,000 crore per year,” he said, speaking at a programme for disposal of the seized drugs at Barhampur in Nagaon district.
The entire money goes outside Assam, without payment of any tax or anything going to the state exchequer, Sarma said, while stressing that the money used by addicts to procure the drugs comes at the cost of well being of families.
“When even one member of a family becomes an addict, the entire family is ruined. The addicts steal from their own homes or even threaten and extract money from the members. And at last, many even take recourse to crimes and anti-social activities,” he said.
He said the fight against drugs is a three-pronged one first to check the supply chain, then to curb the distribution network, and third to rehabilitate those affected by its abuse.
Pointing out that people want the drug peddlers to be shot dead instead of arresting them, Sarma said though the police must act tough against the criminals, they have to do so by following laid-down rules.
“I have given permission (to police) for extreme action (against drug peddlers), but within the law,” he added.
Speaking on similar lines at another programme in Hojai district, Sarma said, “We have adopted a zero-tolerance policy against drugs. I have asked the police to use all legal means, including provision for preventive detentions for up to one year, to check this menace.”
He further said the burning of seized drugs, with due permission from the court, will be undertaken from time to time.
As many as 1,493 drug peddlers have been arrested, 874 cases registered against them, and illegal drugs worth Rs 163 crore seized in the state since Sarma assumed the charge of chief minister on May 10.
The seized contraband includes 19 kg heroin, 8,276 kg ganja, 14 kg opium, 67,650 cough syrup bottles, 1,920 kg morphine, Rs one crore in cash and foreign currency worth Rs 13,630, the chief minister said.
Altogether 9.733 kg heroin, 253.301 kg cannabis, 977 gm of opium, and 2,71,904 seized tablets were burnt in Nagaon, while 324.732 kg heroin, 1015.627 kg ganja/ cannabis, and 35,522 seized tables were destroyed in Hojai.
This was the second and last day of publicly setting ablaze illegal drugs and psychotropic substances with two similar programmes held at Golaghat and Diphu on Saturday.

The chief minister himself took part in the four programmes since Saturday to give out a message of zero- tolerance against illegal drugs. (PTI)