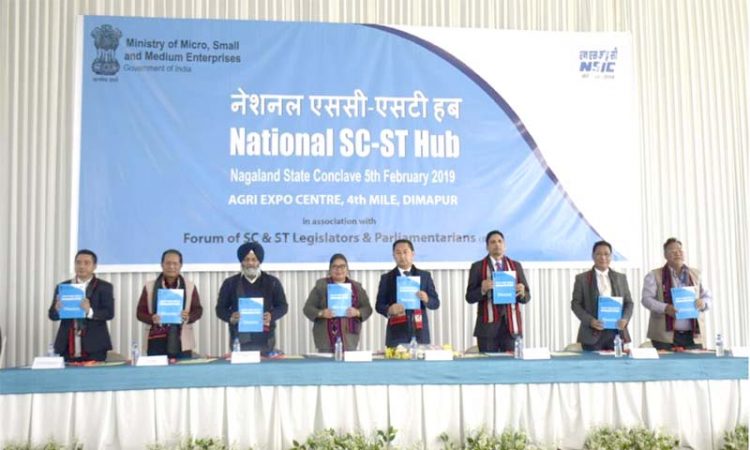 Dimapur, February 5: Advisor, Industries & Commerce, Imnatiba today called upon Nagas to remain united and see that a solution is achieved to the long standing Indo-Naga political issue. He said if people can stand united against the Citizenship Amendment Bill 2016, they can also stand united for this cause.
Speaking at the inaugural session of Nagaland State SC-ST Hub Conclave here at Agri Expo Hall, 4th Mile Dimapur, he said that the reason many of the industrial setups established after the attainment of the statehood had to be shut down is not because Nagas are not hardworking enough but because of the political problem and the growing up of the people under the aspect of dual nationalism.
Admitting that illegal taxation is a problem for the growth of entrepreneurship in the state, he said that as long as the problem is not solved, Nagaland will remain a sorry state and therefore PDA government is giving much importance to solution to the Naga political problem.
Talking about the National SC-ST Hub (NSSH), he said that this is a mother programme of all the programmes aimed at the empowerment of entrepreneurs belonging to SC and ST, but reminded the policy makers that what might work for other states might not be applicable in Nagaland.
He urged the officials to take special care while implementing the programme, as far as Nagaland state is concern. Further, while maintaining that entrepreneurs are the ones for building the State’s economy, Imnatiba encouraged the young entrepreneurs to extent full support to accomplish their desired goals.
He cited how the lack of local context led to blatant misuse of PMEGP schemes in the state and how the targeted groups of people weren’t benefitted but the money went to others’ pockets.
Earlier, Lithrongla G. Chishi, Commissioner and Secretary, Industries and Commerce, GoN said that her department has been trying to make all districts centers IT enabled to make it more people friendly and the entrepreneurs of Nagaland can access all the different programmes.
She reminded the entrepreneurs of Nagaland that they must not try to become successful overnight and be committed  towards quality and be customer friendly. She said that while Nagas are born creative, using that creativity to build business is what is needed.
Citing an example of how big entrepreneurship can get if done correctly, she said that in the recently concluded Hornbill Festival, 2018, a hundred stalls were taken up the Industries and Commerce Department at the Bamboo Pavilion wherein a hundred entrepreneurs did a business of Rupees 1.30 crore dealing in local products.
She said that such programmes are organized to create awareness and hoped that they attendees would take back something valuable from the programme. She also informed that in the next few months the department along with the NIDC will be organizing such programmes in the district levels.
Chairman, MARCOFED, Dr M Chuba Ao who also addressed the gathering, talked about the abundant availability of herbs and bamboo in Nagaland and it’s commercial utilization. Government of India is giving so much facilities but we go only after easy money and subsidies, he rued. He felt that the mindset of the people has to be changed in order to bring change in the society.
National Working President, Forum of SC and ST Legislators Parliamentarians and also Director General, Dr. Ambedkar Chamber of Commerce, Inder Iqbal Singh Atwal, the front man for initiating the programme, said that the programme aims for understanding how NSSH could collaborate with State Government for working together at the ground level, in order to augment the capabilities of existing SC/ST entrepreneurs.
Zonal General Manager, NSIC, North East, Dr. Avinash Chaudhary delivered the welcome note while Branch Manager, NSIC- NSSHO, Guwahati, Peter Thawngneihchina proposed the vote of thanks during the inaugural session.
Imnatiba, along with other dignitaries also released the Directory of MSMEs on Nagaland state on the occasion. (Page News Service)