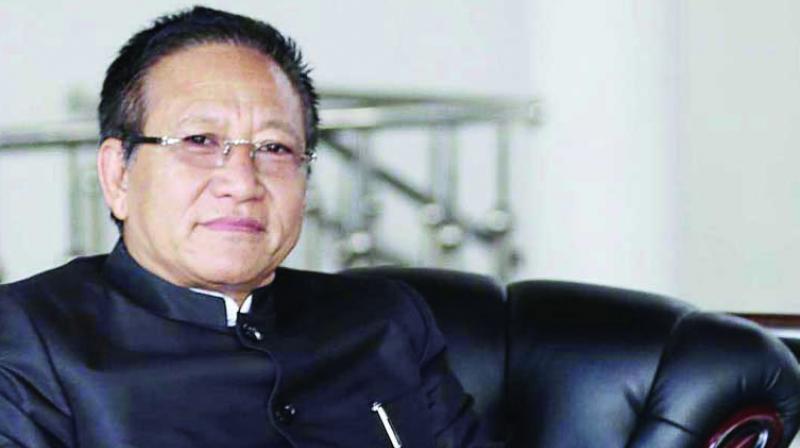 Dimapur, May 25: Winding up the campaigning to the forth coming bye election to the lone Lok Sabha poll, the ‘secular forces’ in the state of Nagaland geared up for the NPF candidate, C Apok Jamir in its battle against the PDA Candidature, Tokheho Yepthomi.
Addressing the last leg of campaign at Mon Town, former Chief Minister and NPF legislature party leader, TR Zeliang called upon all the secular minded people to vote in favor of C Apok Jamir stating, “If people want solution to the Naga political issue, vote for NPF, but if Nagas want more elections, then vote for NDPP”, said Zeliang.
Appreciating the Congress, NPP, AAP and even some BJP and JDU for extending their support to the NPF, Zeliang stated that this unity of the Secular Forces will create a huge impact in ensuring victory in the upcoming bye poll.
In his address, Zeliang reminded the people not to be confused between the NPF and NDPP as NPF is a regional party unlike the NDPP which is a Nationalist party.
According to a press release issued by NPF Press Bureau, the former Chief Minister also accused the present PDA Chief Minister, Neiphiu Rio for creating chaos in the state affairs for the last four years after his journey to Delhi miserably failed.
He alleged that Rio, after failing to get ministerial berth at Delhi Parliament returned to state politics and tried every means to dismantle the government as well as the NPF party for the past four years. “This act of Rio is nothing but a self centered interest and benefit,” Zeliang added.
Zeliang also maintained that Rio’s eleven years rule from 2003-14 have not achieved even half of what his government had done in four years.
Lambasting the much acclaimed PDA Govt’s promise of repairing all District Headquarter roads within sixty days, the former chief minister asserted that no funds had been brought to the state by the ruling Government except the money that were sanctioned during his last ministry, adding that the austerity measures and the anti VIP culture introduced to fool the people of Nagaland by PDA government has become a mockery as people has woken up to see the reality for themselves in the way the government of the day is being run.
Zeliang also called upon the people of Nagaland to rise up to the occasion and vote for the NPF Candidate C. Apok Jamir in the common quest for protecting unity and identity of the Nagas and for protecting democracy and it’s Constitutional values that uphold freedom of religion and unity in diversity.
C. Apok Jamir, in his speech has appealed to the people of Nagaland to vote for him, stating that the upcoming bye election will be a litmus test for the Nagas and shall be crucial for determining the future of the Naga. “It will be a battle of protecting our Christianity and secularism against communal forces,” he said and assured that on being elected, he shall become the voice for the Nagas at the centre and stand for the cause of the Nagas.
Meanwhile, the NPF Spokesperson Achumbemo Kikon in his address assured the people of Nagaland that NPF party and its 26 MLAs are very much intact and further appealed to the people not to be swayed away by Rio’s wild allegations hurled at NPF being divided into three groups which is nothing but a cheap political gimmick.
The spokesperson also stated that Rio had abandoned his Parliamentary seat at a time when the Naga political issue is in its most crucial juncture and added that it is nothing more than to build his own selfish empire which is a rare characteristic of a leader.
The meeting was also addressed by NPF Working President Apong Pongener where he stated that NPF is a political party that exist to work for peace and prosperity of the Naga people and to facilitate the peace process for Naga Solution.
Adding a special touch to the NPF rally at Mon, NPCC Vice President, Tingyeih and DCC President of Mon, Chingwang Konyak, and a host of leaders from NPP and Independent candidates from the last general election also attended and spoke in the meeting echoing the same sentiments for joining secular forces against communalism and affirming their all out support to the NPF Candidate C. Apok Jamir. Adding another feather to the cap of the NPF, the Mandal unit office bearers of BJP from Wakching, Tapi, Aboi and Tobu constituencies resigned from their respective party position to support the NPF candidature.
Beside others, MLA CL John Thonwang and EE Panteang also spoke on the occasion, all voicing out that NPF victory will push the agenda and commitment of the Government of India, ‘Election for solution’, asserting further that this bye election is extraordinary in the Naga political context and will set the course of history for the Nagas. (Page News Service)