HomeIndiaIf laws can be made during pandemic, why can’t they be repealed: Rakesh Tikait
India
3 weeks agoMay 26, 2021lawspandemicRakesh Tikait 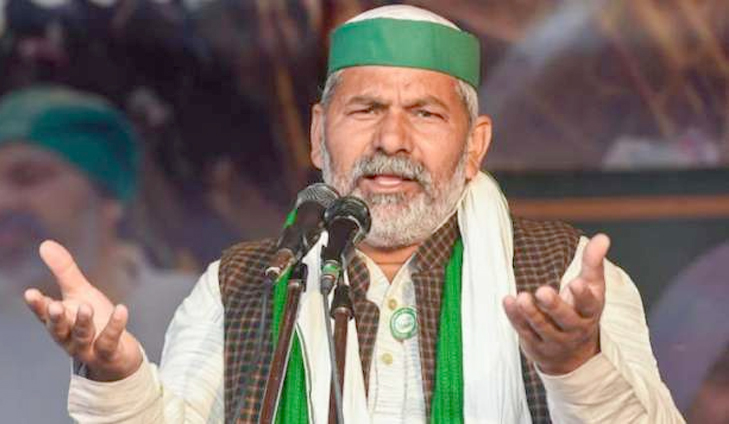 Ghaziabad, May 26: If laws can be made amid the Covid pandemic, why cannot they be repealed, BKU leader Rakesh Tikait said here on Wednesday, underlining that farmers camping at Delhi border points will leave after the three contentious Central agri laws are withdrawn.
His remark came on a day when farmers protesting against the legislations at the Tikri, Ghazipur and Singhu border points observed ‘black day’ to mark six months of their stir.

“The movement will continue for a long time,” the Bharatiya Kisan Union (BKU) leader said while addressing hundreds of protestors at Ghazipur on the Delhi-Uttar Pradesh border.
The call to observe ‘black day’ was given by the Samyukta Kisan Morcha (SKM), an umbrella organisation of protesting farmer unions, which is spearheading the stir against the laws that were enacted in September last year.
Hundreds of farmers, mainly from Punjab, Haryana and Uttar Pradesh, are encamped at the three Delhi border points since November last year. Besides demanding that the legislations be repealed, they have also sought a new law guaranteeing minimum support price (MSP) for crops.
The protestors claim that the laws will hurt their livelihoods and leave them at the mercy of corporations. However, the government, which has officially held multiple rounds of dialogues with the protestors, has maintained that the laws are pro-farmer.
Groups of protestors converged at the UP Gate on the Delhi-Meerut Expressway as part of the ‘black day’ demonstrations and burnt an effigy symbolising the Centre, amid heavy police deployment. This led to a brief scuffle between the two sides in which the BKU claimed one farmer got a little burnt when security officials tried to snatch away the effigy.
The movement will continue for a long time. If laws can be made during the Covid pandemic, then why cannot they be repealed during the pandemic, Tikait, the BKU national spokesperson, said.
The government has been trying to crush the movement and will do so in the future also. But the farmer is not going to leave Delhi borders. The farmer can return home only on the same condition — repeal all three new laws and make a new law guaranteeing MSP for crops, he was quoted as saying in a BKU statement.
The influential farmer leader from western Uttar Pradesh also said that he does not know what will be the fate of the movement but knows for sure that if the movement fails, then the government will do as it pleases .
If the movement is successful, the future generations of farmers will get its benefit, remarked Tikait, who is credited with reviving the protests after it lost its sheen post the January 26 violence in Delhi.
During his address to supporters, Tikait, sporting a black turban, also hit out at the government over the handling of the Covid pandemic, citing black marketing of resources and shortage of health care facilities for the public hit by the deadly virus.

There was an attempt to loot the country in the name of the illness, he alleged.
He reiterated that the BKU will not allow business over hunger in the country .
For this, Tikait called on the supporters to continue their protest peacefully and with patience.
He also cautioned them to guard the movement the way crops are guarded.
The farmers are protesting against the the Farmers’ Produce Trade and Commerce (Promotion and Facilitation) Act, 2020; the Farmers’ (Empowerment and Protection) Agreement on Price Assurance and Farm Services Act, 2020; and the Essential Commodities (Amendment) Act, 2020. (PTI)