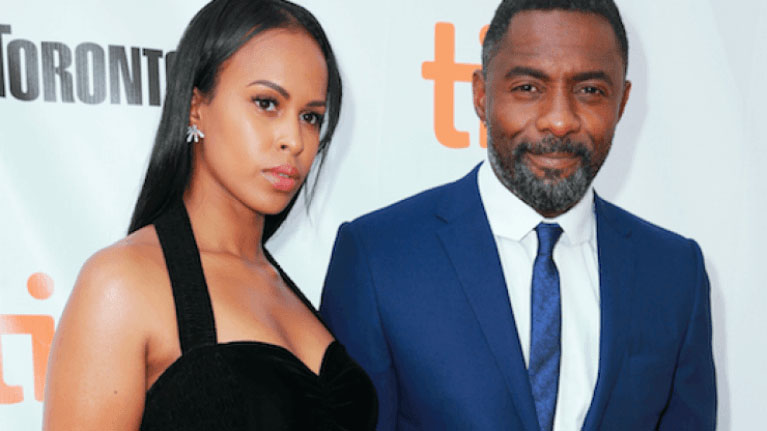 The Luther actor and his new wife tied the knot after getting engaged on 10 February 2018 following a year of dating.
In romantic pictures shared by British Vogue the happy couple beamed after exchanging their vows on 26 April at the Ksar Char Bagh hotel in Marrakesh.
30-year-old Sabrina wore two custom dresses by Vera Wang; while Elba wore a bespoke suit by British designer Ozwald Boateng.
For the white wedding ceremony Sabrina – who is a former Miss Vancouver and has recently modelled at London Fashion Week – wore a classic off-the-shoulder white A-line gown.
Later the bride made a change and swapped her gown for a V-neck style embroidered dress with pearls and gemstones and finished with couture lace.
And in true Hollywood style, the wedding is being spread out over three days.
Friends and family attended a traditional ‘colours of the Souk’ themed dinner the night on Thursday at the Amanjena while tonight will see guest attend an all-white party at the Mandarin Oriental.
The rest of the pictures will be published in a world exclusive for the upcoming July 2019 issue of British Vogue.
The celebration comes after Sabrina was forced to deny she had secretly married Idris earlier in the year.
The Avengers actor called his then-fiancé his ‘wife’ in February and fans took it as ‘confirmation’ that the pair took their vows already.
However, speaking exclusively to Metro.co.uk, Sabrina addressed the rumours as she flat out denied any secret nuptials.
‘Our wedding is coming up soon and I’m really looking forward to it,’ she confirmed to us a month before her bridal party held a lavish hen do for her in Utah.
The Pacific Rim actor met his Canadian-Somali beau on the set of Mountain Between Us in Canada.
While filming with Kate Winslet, Idris caught the eye of Sabrina, and love flourished, with the DJ saying on The Jess Cagle Interview: ‘Falling in love while making a movie about falling in love is pretty special.’
Idris has been married twice before – to Hanne ‘Kim’ Norgaard from 1999 until 2003, and to Sonya Nicole Hanklin in 2006. He has a 16-year-old daughter, Isan, with ex Kim and a four-year-old son named Winston with former girlfriend Naiyana Garth.