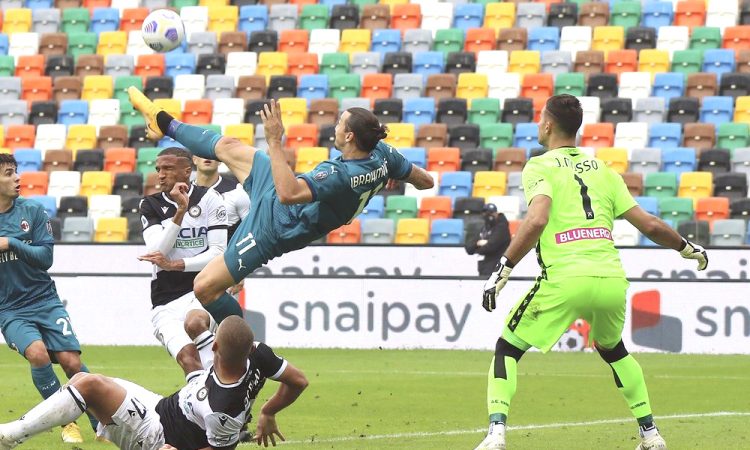 Milan, November 1: Zlatan Ibrahimovic set up one and scored the winner to help Serie A leader AC Milan win 2-1 at lowly Udinese on Sunday. Ibrahimovic continued to roll back the years with an overhead kick seven minutes from time after a Rodrigo De Paul penalty canceled out Franck Kessié’s opener. The 39-year-old Ibrahimovic, who recently recovered from the coronavirus, has now scored seven goals in his past four league matches.
Milan is now unbeaten in 23 matches in all competitions and moved four points clear of second-place Atalanta. Napoli or Sassuolo can close the gap to two points if either win in their head-to-head meeting later.
Juventus will move to within four points of Milan if the nine-time defending champion wins at newly promoted Spezia later. Cristiano Ronaldo should feature after recovering from the coronavirus.
In Udine, Milan took the lead in the 18th minute with a fantastic team move. Ismaël Bennacer sent a long ball over the top that Ibrahimovic chested down and held up before laying it off to Kessié, who blasted it into the top right corner.
Udinese leveled early in the second half when Alessio Romagnoli fouled Ignacio Pussetto and De Paul converted the resulting penalty.
Just as the match appeared to be heading for a draw, Ibrahimovic reacted quickest in the area to acrobatically hook the ball into the back of the net. (AP)