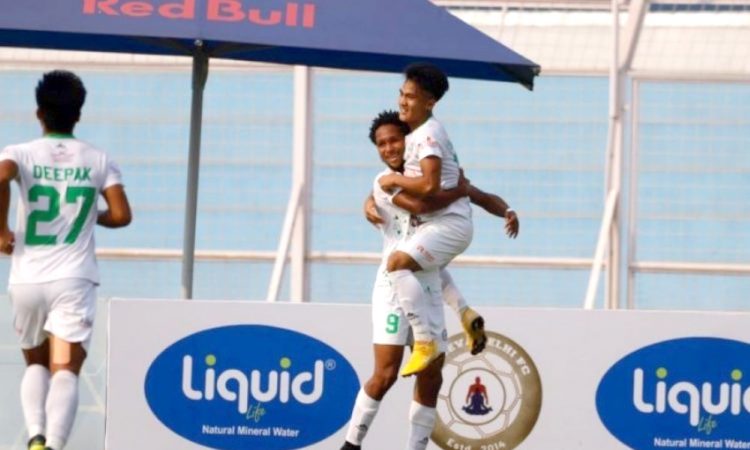 NFC's Judah Garcia celebrates with his teammates after scoring the goal in the first half.

KOLKATA, February 19: NEROCA FC gave themselves a chance to finish in the top six by blanking Sudeva Delhi FC 2-0 in the I-League here on Friday.

Goals by Judah Garcia (45th minute) and super-sub Songpu Singsit (72nd) ensured a victory for Gift Raikhan’s side in a hard-fought game against the newcomers.
NEROCA had the first sight of goal in the seventh minute, as Garcia dispossessed Naorem Tondomba and his long-distance attempt hit the side-netting of Rakshit Dagar’s goal.
Sudeva’s Naorem Mahesh threaded a through pass for Shubho Paul, but NEROCA’s custodian Bishorjit Singh came off his line to collect it.
Sudeva were handed an opportunity to take the lead on a platter when Jiteshwor Singh brought down Mahesh in the penalty area. However, Kean Lewis’ spot kick in the 12th minute was pushed away by Bishorjit Singh.
Seconds later, Mahesh blasted Lewis’ cutback from a free-kick high of the goal.
Raikhan’s side did get an opportunity to strike in the 13th minute after Garcia brought down Lungdim’s cross, but was unable to take his shot. The loose ball, however, fell to Subash Singh, who hit his shot wide of the target.
The game died down a little in terms of opportunities as Sudeva started to hold the majority of the possession.
Sudeva’s Shaiborg Kharpan was brought down just outside the area by Bishorjit Singh in a one-on-one in the 37th minute. Luckily for the keeper, the young striker’s touch was heavy and he earned just a yellow card for his tackle.
Mahesh’s shot from the following free-kick looped into the hands of Bishorjit after it hit the wall.
Sudeva went on to create chances but lacked quality in the final third. They were punished on the 45th minute as NEROCA quickly took a free-kick in their own half.
Garcia was at the end of a Khaiminthang Lhungdim’s cross on the quick break and the Trinidadian powered his header past Rakshit Dagar, giving the Orange Brigade the lead just before half-time.
Rakshit Dagar saved Sudeva Delhi from falling further behind in the 53rd minute. The keeper showcased quick reflexes to deny Judah after the goalscorer had dispossessed Gursimrat Gill off the ball in the penalty area.
Meanwhile, Sudeva kept attacking and came close to the equaliser twice in the 57th minute.
Bishorjit pulled off a brilliant save off Kharpan’s header from Naorem Mahesh’s corner before Deepak Singh cleared substitute Augustin Fernandes’ header off the line.
Bisjorjit made another fine stop in the 65th minute when a William Pauliankhum set-piece was knocked into the path of Naocha Singh. The substitute was denied entry again by the NEROCA custodian.
NEROCA broke on the counter and Prakash Budhathoki struck the crossbar after some good work by Garcia.
NEROCA found their second goal in the 72nd minute when Songpu Singsit beat a defender and curled his shot past Rakshit Dagar from just inside the area. (PTI)