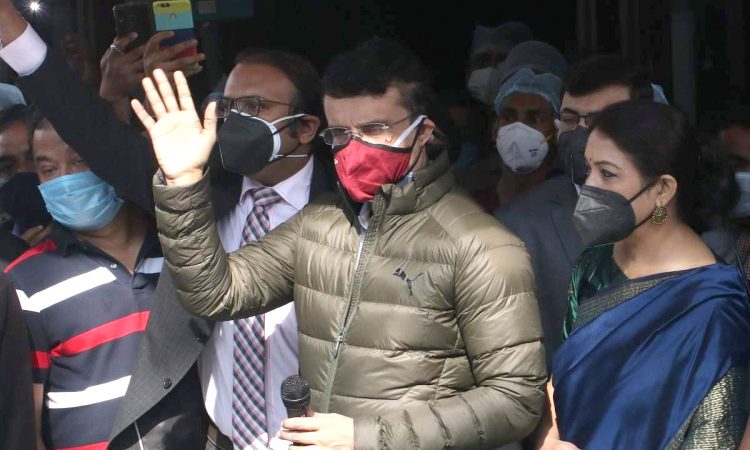 KOLKATA, January 7: Board of Control for Cricket in India (BCCI) president Sourav Ganguly on Thursday said he is feeling “absolutely fine” as he left from the Woodlands Hospital in Kolkata and headed home.
The former Indian skipper also thanked the medical team for looking after him and doing the needful procedures after he arrived at the hospital with chest discomfort and had to undergo angioplasty.
“I thank the doctors at the hospital for the treatment. I am absolutely fine. Hopefully, I will be ready to fly soon,” Ganguly told reporters outside the Woodlands Hospital.
Ganguly, who was hospitalised on Saturday, spent five days in the hospital and will now be looked after at home.
The treating doctors will now be keeping a “constant vigil” on Ganguly’s health and appropriate measures will be taken from time to time, the hospital said.
On Wednesday, it was informed that Ganguly, who is fit now, will be discharged from the Woodlands Hospital on Thursday. The former India skipper was scheduled to be discharged from the hospital on Wednesday, but he decided to stay one more day in the hospital.

Earlier on Tuesday, in the bulletin, the hospital said: “Report of routine blood tests are satisfactory, Echocardiography shows preserved left ventricular function with an ejection fraction of 56 percent.”
The former India captain was hospitalised at 1 pm on January 2 with “chest discomfort, heaviness of head, vomiting and a spell of dizziness” while performing physical exercise in the home gymnasium at around 11 am. Following this, doctors had conducted angioplasty on him.
Dr. Rupali Basu, MD, and CEO of Woodlands Hospital, on Tuesday, said the former captain will be monitored at home on a daily basis after being discharged.
The 48-year-old will be ready for the next course of procedures or medical intervention after about 2-3 weeks, further said Dr Basu while informing the reporters about the health of Ganguly.
Cardiologist Dr Devi Shetty also met the medical team of nine doctors attending to Ganguly and then a further course of action was decided by the hospital. Dr Shetty said that the heart of Ganguly is now as strong as it was when the former India skipper was 20-years-old. (ANI)