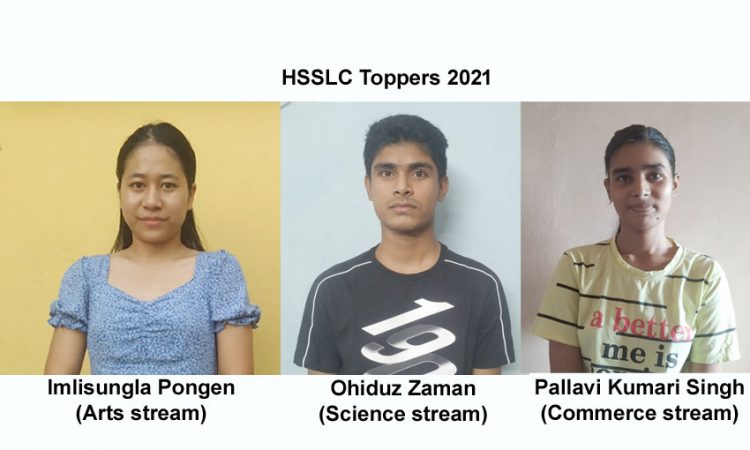 DIMAPUR, JULY 20: The common thread that binds the HSSLC toppers for the year 2021 together is their absolute simplicity, unfaltering dedication, and the belief that they were going to make it to the toppers’ list despite all odds. Also, they have two siblings each.

According to Pallavi Kumari Singh, the Commerce stream topper and a student of Pranab Vidyapith Higher Secondary School (PVHSS), she missed the toppers’ list when she had appeared for her HSLC exam and this fuelled her determination to try harder, and resulted in her securing the top position this time. She was expecting to be among the toppers, but not No. 1
Similarly, Imlisungla Pongen, who topped the Arts stream, and Ohiduz Zaman, Science stream topper, were both expecting to be among the toppers. Pongen in her HSLC examinations had secured 14th position and Zaman, 2nd position.
Interacting with media persons at her house at Khermahal, Dimapur, Singh said that she followed a rather rigid routine and studied for 6 hours every day, dividing the hours throughout the day besides tuitions. She now plans to appear in competitive exams as well as pursue Bachelor’s in Commerce.
Principal of PVHSS Manoj Bhattacharjee told media persons that it was a difficult year and for a while he was worried about the results because of the circumstances and irregularities of students during the online classes, but towards the end things fell in line and he was confident of both Singh and the school doing well.
Unlike Singh, Pongen, a student of St. Paul Higher Secondary School, didn’t follow any routine but made sure that she completed her lessons before deciding to call it a day. According to her, if one wants to be successful in exams, he/she needs to put God first.
“You can do nothing without God”, she said adding that faith in God and hard work is must. Pongen is planning to pursue Bachelor’s and Master’s in Arts and appear in competitive exams.
Pongen’s Principal, Sister Bridget, described her student as very polite, well-behaved and hard working, and told media persons that she had full confidence in her.
Zaman, a student of Little Star Higher Secondary School (LSHSS), who thinks the pandemic has been a source of great distraction for students, said that if one wants in succeed in the exams, he/she needs to be focused, consistent and diligent ~ which he has always tried to do ~ and prepare from the beginning.

Right now, he is yet to confirm his next move, though he has prepared himself to appear for both NEET and JEE. His father, Abdul Malik, who is a businessman, has left it to the son to decide what is best for him.
Sharing experiences of continuing their studies in the midst of the pandemic, Pongen said that she was a bit concerned about completing the syllabus on time, but she kept her faith in God and things turned out well. Singh, who was facing difficulty at times to understand certain topics during online classes, could clear all her doubts once physical classes started.
For Zaman, his teachers who were always available to clear doubts, was a great help for him and he also took advantages of social media and digital educational materials made available by the Department of School Education.
Zaman’s Principal, Christina Paira, told media persons that LSHSS was one of the first schools in the State to start online classes and because the teachers were familiar with the technology, they could quickly adapt.
(Page News Service)