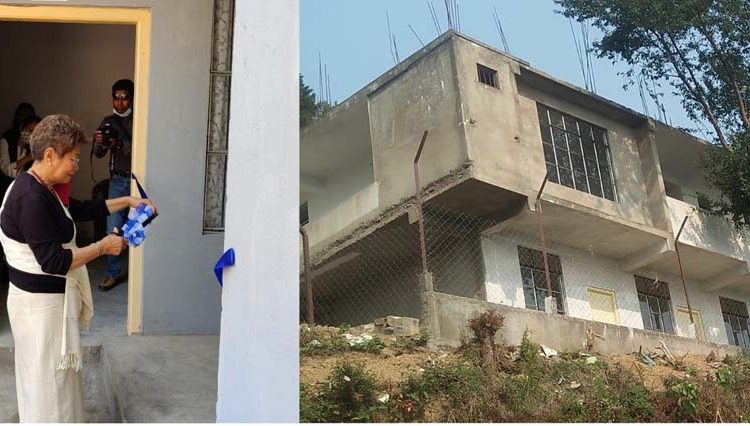 Dimapur, April 13: The Alumni PG Women’s Hostel, with a capacity for accommodating 40 post-graduate students, was inaugurated by Dr. Joyce Zinyu Angami, the first female doctor from Kohima Science College, at KSC campus on Tuesday. The hostel was constructed by the Alumni Association, KSC.

Dr. Joyce Zinyu Angami said that the completion of the hostel has been a dream come true for all those involved in the project, and expressed hope that it will not just be a place to find academic excellence but also a place of safety, peace, and serenity.
Principal of KSC, Dr. Lily informed that at present, the college has four hostels – three for boys and one for girls — with a total capacity of 320 students. She said that since 2016, after adopting the Choice Based Credit System, the college has seen a huge increase in intake of students.
The current academic session has enrolled around 2000 students with female students constituting 65%, the principal added. She stated that the completion of the hostel is a huge relief for the college as many students are from the economically weaker section.
She expressed gratitude to the Alumni Association for their contributions and support.
General Secretary of Alumni Association, Avelu Ruho said that the association, formed on July 3, 2009, initiated Project Alpha 1 in 2009 during which the college’s Local Area Network (LAN) of 100 Mbps and High Speed Broadband Service was operationalized.
Emboldened by the success of the project, the association decided to pursue the need for constructing a girls’ hostel and named it as Project Alpha 2 with an estimated budget of Rs 1 crore.

Ruho revealed that the search for fund was not an easy but after many setbacks, the association had received Rs 90 lakh in donations, contributions and a raffle draw organized in 2017. She thanked the faculty and staff of KSC, former principals of the college involved in the project for the successful completion of the hostel. (Page News Service)