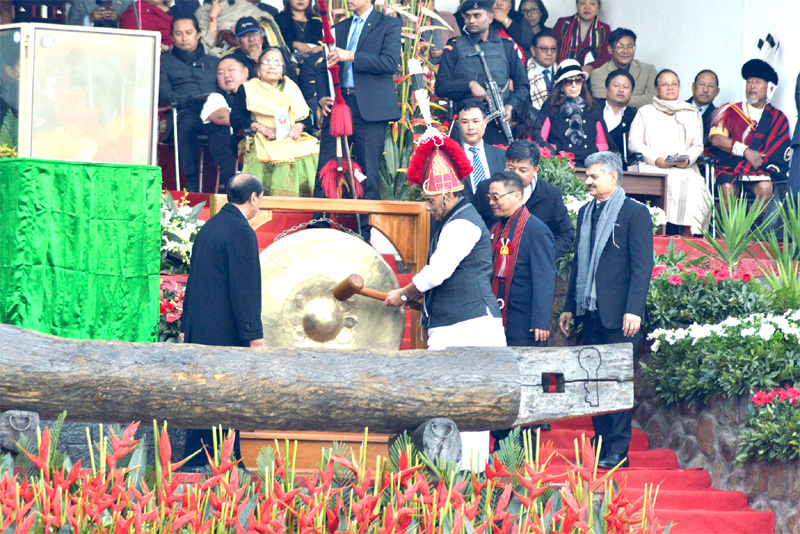 Kohima, December 1: Union Home Minister Rajnath Singh today inaugurated the 10-day long Hornbill Festival of Nagaland to a colourful start at the picturesque Naga Heritage Village Kisama, about 12 kms from the State capital here.
Hornbill Festival is an annual tourism promotional event of Government of Nagaland.
In his address to 19,953 celebrants, which include 382 foreigners, 3371 domestic tourist and 16,200 local visitors, Singh said “this spectacular event showcases the rich ancient culture and civilization of the people of Nagaland”.
“It powerfully demonstrates the cultural diversity and civilizational unity of the Naga people,” he said, adding that each tribe is proudly unique in their cultural richness and yet there is an overwhelming sense of unity among all.
“This spectacular demonstration of unity in diversity in what India is all about,” the Home Minister said while opining that at the Hornbill festival he gets a glimpse of the Indian spirit of happy peaceful co-existence of the multiplicities.
“It is a festival that offers unique opportunity not only to the different tribes of the State to interact with each other and exhibit their cultural heritage but also with those from the neighbouring and other States in the true spirit of “Ek Bharat, Shrestha Bharat”, Singh said.
While we must celebrate the past at the Hornbill, we should also celebrate the present and the future with several festivals of skills and creativity of our youth, he said
Stating that Nagaland is geographically located at a vantage point, it is the gateway to the South-East Asia, he said North-East is the pivot of Central Government’s ‘Act East’ policy.
Government of India is determined to build and improve our connectivity and engagement with South-East Asia, he said, adding that India and ASEAN are partners in growth. He expressed hope that the story of this growth will be written by the youths of the North-East region.
Claiming that the government has opened a bright new chapter in the growth story of North-East region, he said with remarkable restoration of peace, North-East is emerging as a favoured destination of businesses and tourists.
Steps are also being taken for speeding development of North-Eastern Region, including Nagaland, he said while stating that the Centre believes that the nation can prosper only when all the states develop at a faster pace.
US Ambassador to India, Kenneth I. Juster also attended the inaugural function as guest of honour while Justice Sharad Arvind Bobde was the special guest.
Singh and Juster along with Chief Minister Rio also joined the Christmas Carol service of Kohima Baptist Pastors’ Fellowship before leaving Kisama chapel.
Nagaland Governor PB Acharya said, “We Nagas deserve gratitude and appreciation for making the Hornbill as one of the most talked about cultural festivals in the country.”
He said Government of India has recognized Hornbill festival as one of the major performing artist’s events in India.
He said Hornbill festival gives a boost to tourism in the State and this festival has become a regular feature in the itinerary of our tour operators and tourists.
“Over the years with the efforts of the State government and the people, the number of people coming to the State to witness the festival has increased manifold. The successive Hornbill Festivals have also played a significant part in this endeavour by creating awareness about the people and the State,” he said.
Music and dance are an integral part of life of each tribe and it has the potential to attract more tourists and rapid economic growth of the State. Our youth excel when it comes to music and community dance. The traditional folk songs, the poetic love songs, the gospels and the exquisite classical tunes strengthen our ancestral life philosophy and our roots. Our identity is not only Dance & Music but should be economically strong society.
“Permanent peace is essential for an investment friendly environment. Peace has to be sustained. I hope that with the blessings of Almighty and ongoing peace talks in New Delhi, we will be able to enter an era of permanent peace,” the Governor said adding that Prime Minister Narendra Mod has the political will and guts to address our problems and bring a respectable solution.
To home Minister Rajnath Singh, he said “we are optimistic about the prospects of the on-going dialogue to bring about a resolution of the long pending political issue.”
Chief Minister Rio while touching on similar lines told Singh, “Your help and support to Nagaland is vital as we look forward to final settlement of Indo-Naga political issue for which the negotiations are at an advanced stage”.
Meanwhile, Rio said tourism has the potential to be the mainstay for Nagaland’s economy. “Our focus has been to promote eco-tourism and sustainable tourism across the State through the Mini Hornbill Festivals which creates more opportunities for the people in the districts to showcase our diverse culture. It also provides tourists and visitors with more opportunities and events throughout the year thereby making tourism in the State sustainable,” he said.
Reiterating that the people should join hands towards attaining sustainable tourism, Rio said since time immemorial, Nagas have had an oral tradition but now the onus is up to us, our historians, our thinkers and writers, and our tribal bodies to document our history.
“It is up to us to work unitedly to promote our traditional practices, attires, adornments, cuisine, songs and dances, arts, handloom and handicrafts and most importantly our folklore so that our visiting friends can take back memorabilia and souvenirs with them,” the CM said.
Rev. Dr. Zelhou Keyho, general secretary Nagaland Baptist Church Council invoked God’s blessings while Village Chief Shikuto Zalipu pronounced traditional blessings.
Tourism Department in collaboration with Rattle & Hum Music Society presented the cultural extravaganza for the inaugural programme. (Page News Service)