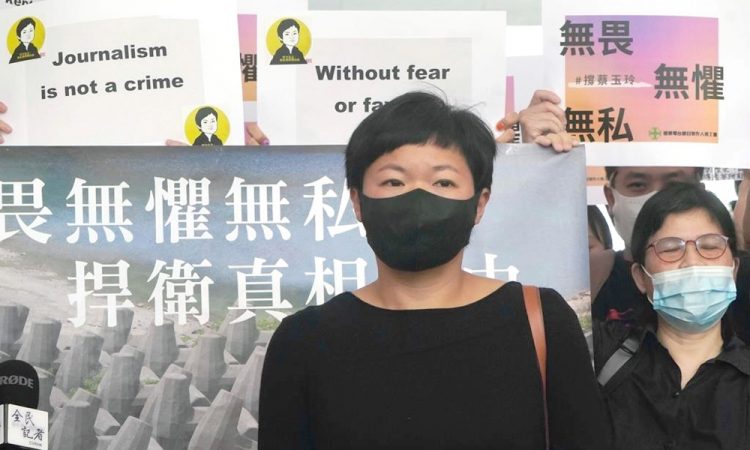 Hong Kong journalist Choy Yuk-ling, also known as Bao Choy, arrives a court in Hong Kong Thursday, April 22, 2021. Hong Kong journalist Choy appeared in court on Thursday for verdict on charges of making false statements while obtaining information from a vehicle database. Choy, a producer at public broadcaster Radio Television Hong Kong, was arrested in Nov 2020. She was involved in the production of an investigative documentary into the behavior of Hong Kong police during 2019 anti-government protests, after the force was accused of not intervening during a violent clash between protesters and a mob of men in a subway station. (AP Photo/Kin Cheung)

Hong Kong, April 22: A Hong Kong journalist was found guilty on Thursday of making false statements in obtaining information for an investigation into an attack on anti-government protesters, in the latest blow to press freedom in the city as authorities continue their crackdown on dissent.

Choy Yuk-ling, also known as Bao Choy, was arrested in November on charges of falsely declaring why she was obtaining license plate information from a publicly accessible database.
She was attempting to track down the perpetrators of a violent attack by a mob of white-clad men on protesters in a subway station in 2019 for an investigative documentary for public broadcaster RTHK.
Principal Magistrate Ivy Chui said the Road Traffic Ordinance only allows the public to obtain vehicle ownership records for transport or traffic-related matters, legal matters, or for vehicle purchases.
She said Choy declared in her online application that she would use the information for other traffic and transport related issues. The application does not provide an option for journalistic research.
Choy, a freelancer affiliated with RTHK, pleaded not guilty. She was convicted on two counts of making false statements and fined 6,000 Hong Kong dollars (USD 775).
The documentary Choy was working on, titled 7.21 Who Owns the Truth, also explored the behavior of Hong Kong police during last year’s anti-government protests. Police were accused of not intervening during the attack in the subway station.
Ahead of the court session, supporters of Choy held placards that read Journalism is not a crime and chanted slogans.
Media groups are concerned that Hong Kong’s new security law, which outlaws secession, subversion and foreign collusion to interfere in the city’s internal matters, could be used against journalists reporting on issues considered related to national security. (AP)