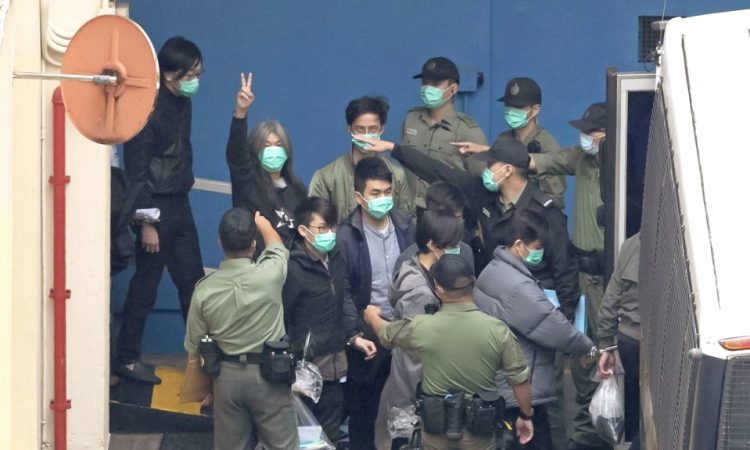 Former lawmaker Leung Kwok-hung, known as "Long Hair," second left, shows a victory sign and some of the 47 pro-democracy activists are escorted by Correctional Services officers to a prison van in Hong Kong, Thursday, March 4, 2021. A marathon court hearing for 47 pro-democracy activists in Hong Kong charged with conspiracy to commit subversion enters its fourth day on Thursday, as the court deliberates over whether the defendants will be granted bail. (AP Photo/Kin Cheung)

Hong Kong, March 4: A Hong Kong court on Thursday ordered all 47 pro-democracy activists charged under a Beijing-imposed national security law to be kept in custody after the Department of Justice appealed an initial decision to grant bail to 15 of them.

Prominent pro-democracy advocate Joshua Wong, who is currently serving a 13 1/2-month jail sentence on protest-related charges, as well as Benny Tai, the co-founder of the 2014 Occupy Central movement, are among the activists charged this week.
The case has drawn international scrutiny, with advocacy groups and politicians condemning the charges.
UK Foreign Secretary Dominic Raab had earlier called the charges deeply disturbing and said the national security law was being used to eliminate political dissent. (AP)