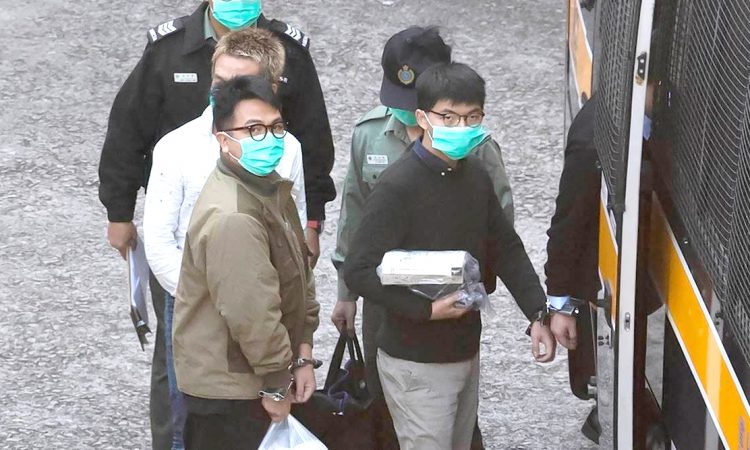 Hong Kong activists Joshua Wong, right, and Ivan Lam, left, are escorted by Correctional Services officers to get on a prison van before appearing in a court, in Hong Kong, Wednesday, Dec. 2, 2020. (AP Photo)

Hogn Kong, December 2: Hong Kong pro-democracy activists Joshua Wong, Agnes Chow and Ivan Lam were sentenced to jail on Wednesday on charges related to an unauthorised anti-government protest last year at the city’s police headquarters.
Wong, who pleaded guilty to organizing and participating in the protest, received 13 1/2 months behind bars. Chow, who also pleaded guilty to participating in the protest and inciting others to take part, received 10 months, while Lam received 7 months after pleading guilty to incitement.
The protest took place on June 21 last year, and saw thousands surround the police headquarters as they demonstrated against excessive force by police against protesters, as well as a now-withdrawn extradition bill that would have allowed suspects to be extradited to mainland China.
The trio were members of the now-defunct political group Demosisto. It is the first time that Chow, 23, has been given a jail sentence. Wong, 24, and Lam, 26, had previously been jailed over charges related to their activism.
Their jailing comes as Beijing tightens control over the semi-autonomous city following months of anti-government protests last year, which occasionally saw violent clashes between protesters and police.
Between June 2019 and October this year, over 10,000 people have been arrested on protest-related charges. In June, Beijing imposed a sweeping national security law on Hong Kong to crack down on dissent, and outspoken pro-democracy advocates such as media tycoon Jimmy Lai and Chow have been arrested under the law. (AP)
The jailing of Wong, Chow and Lam drew rebuke from Amnesty International, which said they must be released immediately and unconditionally. “Once again, the government has used the politically motivated charge of ‘inciting others to protest’ to prosecute people who have merely spoken out and protested peacefully, said the group’s Asia-Pacific regional director, Yamini Mishra.
By targeting well-known activists from Hong Kong’s largely leaderless protest movement, authorities are sending a warning to anyone who dares openly criticize the government that they could be next. (AP)