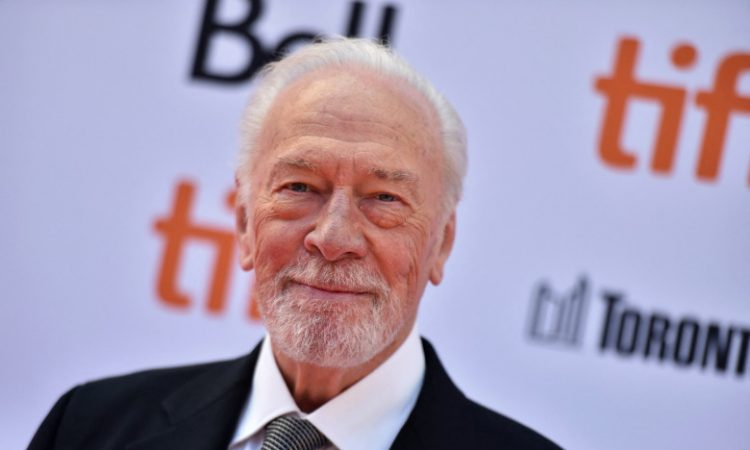 Christopher Plummer attends the "Knives Out" premiere during the 2019 Toronto International Film Festival at Princess of Wales Theatre on September 07, 2019 in Toronto, Canada. Photo by Lionel Hahn/Abaca/Sipa USA(Sipa via AP Images)

Hollywood celebrities, including the “Knives Out” team of actor Chris Evans, Ana de Armas and filmmaker Rian Johnson, have paid tributes to veteran star Christopher Plummer who died on Friday. The award-winning actor, who played Captain von Trapp in the classic film “The Sound of Music”, died Friday morning at his home in Connecticut with his wife, Elaine Taylor, by his side.
In a career spanning five decades, Plummer featured in films such as “The Girl With the Dragon Tattoo”, “Beginners”, for which he won an Oscar for best supporting actor at the age 82, and “All the Money in the World”. In a statement to Deadline, Plummer’s “The Sound of Music” co-star, veteran actor Julie Andrews, said that she has lost a “cherished friend”.
“The world has lost a consummate actor today and I have lost a cherished friend. I treasure the memories of our work together and all the humour and fun we shared through the years. My heart and condolences go out to his lovely wife Elaine, and his daughter Amanda,” Andrew said. Evans, who played Ransom, the grandson of Plummer’s Harlan Thrombey in Johnson’s smash-hit whodunnit “Knives Out”, called the veteran actor’s death an “unbelievable loss” for Hollywood.
“Few careers have such longevity and impact. One of my favourite memories from Knives Out was playing piano together in the Thrombey house between set ups. He was a lovely man and a legendary talent,” the actor wrote on Twitter. Actor Daniel Craig also released a statement, saying he is “deeply saddened” by Plummer’s death.
“Christopher Plummer was a lovely, charming man. I was humbled and incredibly fortunate to get the chance to work with him. He was a joy to be around. My heart goes out to his family and loved ones,” he added. Johnson posted on Twitter, “RIP to Christopher Plummer, a living legend who loved his craft, and was an absolute gentleman. So lucky to have shared a set with him.” De Armas said she feels “lucky” to have shared screen space with Plummer in “Knives Out”.
My heart is broken, my dear Chris. I feel your loss deep inside. How lucky was I having you next to me in what’s been one the best experiences of my career,” she wrote in a post on Instagram. Actor Jamie Lee Curtis, who also starred in “Knives Out”, shared a black and white portrait of Plummer to honour the veteran actor.
“I made this portrait of Christopher Plummer the first day of filming@knivesoutAs I played his eldest child I wanted to connect a moment with him and I sat in the little study that he had as a room to wait in and we talked. “I had very little work with him but we made a lovely connection. His work in that movie is full of life, love and longing. A beautiful portrayal. Honoured to have been able to work with him,” she wrote in the caption. Veteran filmmaker Ridley Scott, who had replaced embattled actor Kevin Spacey with Plummer in his 2017 movie “All The Money In The World”, also mourned his demise.
“What a guy. What a talent. What a life. And I was fortunate enough to work with him less than two years ago and had a wonderful experience. My heartfelt condolences go to Elaine. He will be really missed,” he said. William Shatner, Plummer’s co-star from Star Trek VI: The Undiscovered Country”, also paid tributes to his friend..
“He was what I call a friend. What is the definition of a friend? Somebody you know intimately whose every breath and every thought that is so much like yours or can a friend be someone whose life is intertwined near and afar with great gaps of time between meetings? That was the kind of friend Chris Plummer was to me,” he tweeted. British star Helen Mirren, who featured opposite Plummer in 2009’s Leo Tolstoy biopic “The Last Station”, remembered the actor as a “mighty force”. “He was an actor in the 19th century meaning of the wordhis commitment to his profession. His art was total, theatre being a constant and the most important part of the totality of his drive to engage with storytelling.
“He was fearless, energetic, courageous, knowledgeable, professional and a monument to what an actor can be. A Great Actor in the truest sense,” she said. Kathy Bates, Plummer’s co-star from 1995 movie “Dolores Claiborne”, called him a “true craftsman”.
“One of the greats. A lovely human being. ‘Good night, sweet prince. And flights of angels sing thee to thy rest’,” she tweeted. (PTI)