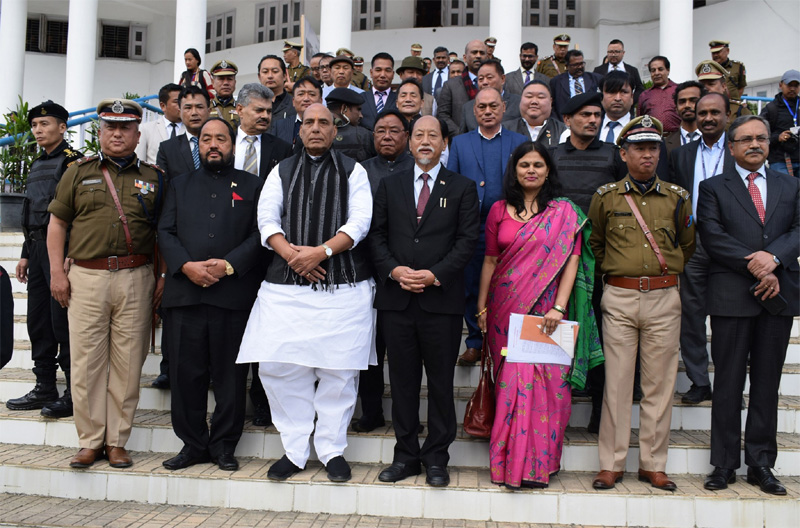 Kohima, December 1: Nagaland today became the first state in the North East and second in the country after Himachal Pradesh to launch the Emergency Response Support System (ERSS) – 112.
Union Home Minister, Rajnath Singh officially launched the system at Police Headquarters here in presence of Chief Minister Neiphiu Rio and Deputy CM, Y Patton.
Rajnath said that under the ERSS project, people will be able to receive immediate assistance from police, health and fire departments as well as from other agencies using a pan-India single emergency number 112.
Maintaining that half of the country’s population is women, he said the country where women are safe is strong and no one can stop the development of that country.
“Therefore, a country to progress needs to provide a safe and secure environment to its women and facilitate their participation in all developmental activities, and then only we can achieve the optimum growth of our country”, he said.
“If we make our cities and settlements safe, then women will automatically participate in the progress of the country and the country will move forward,” the HM said.
In this, Singh said that to ensure safety and security of women, the Government has taken various initiatives, which include creation of Women Safety Division in the Ministry while laws have been amended by making relevant sections of Indian Penal Code and Code of Criminal Procedure have been made harsh.
Fast Track Courts have been established to deal with sexual assault related cases while portals have been launched for national data based on sexual offenders and cyber crime, he said.
PAN India 24X7 helpline number 112 is being launched today, the HM said adding to further strengthen and ensuring the safety of women, a SHOUT feature has been made available exclusively for women in ‘112 India’ mobile app. Using SHOUT feature, women in distress will able to seek immediate assistance from nearby registered volunteers as well as from Emergency Response Center, he said.
An Emergency Response Centre (ERC) has been setup in Kohima and three District Command Centers to offer this unified emergency service while Response Vehicles have been fitted with Mobile Data terminals (MDTs), he said, adding that on receipt of the SOS, the ERC can dispatch the nearest vehicle for assistance.
This system also utilizes Location Based Services to assist ERC in locating the distress caller for immediate assistance in case of emergency, the HM said.
Nagaland Chief Minister Neiphiu Rio in his brief address said ERSS is a state of the art system that makes access to security simple and easy for the citizens.
Such a system will also help in optimum utilization of manpower and will ensure prompt action in times of emergency, he said adding that the system also has the feature of automated response system to enable the police to reach the exact scene of a crime or incident without any delay.
Stating that the launch of the ERSS is very timely as 19th Hornbill Festival begins today, he said lakhs of tourists will come to Kohima during the next ten days and its important that “we ensure safety and security of all tourists”.
He acknowledged the Union Home Minister and Government of India for providing the financial assistance of Rs 4.84 crores for the project while also lauding Centre for Development of Advanced Computing (CDAC) for providing technological support for ERSS.
The project is being implemented in Kohima, Dimapur and Mokokchung districts to begin with and will soon be launched in the remaining districts, the CM added. (Page News Service)