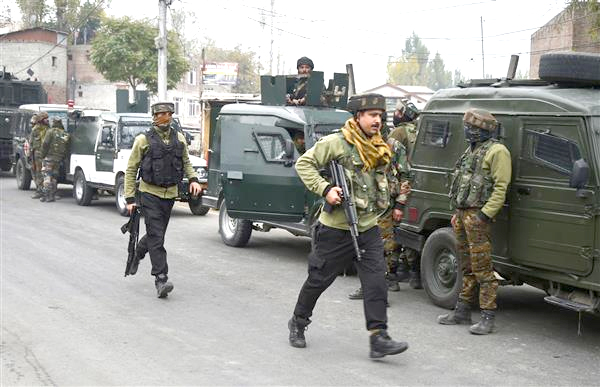 Security personnel leave after an encounter with militants, at Rangreth on the outskirts of Srinagar, on Sunday, November 1, 2020. PTI

NEW DELHI, November 1: In a “big success” for the security forces, Hizbul Mujahideen (HM) chief Dr Saifullah — one of the most wanted terrorists in the Kashmir valley — was gunned down during an encounter near Srinagar on Sunday.
After the death of Riyaz Naikoo in May this year, Hizbul Mujahideen was rendered leaderless until Saifullah took charge of the outfit and ran the terror machine of Pakistan in the Valley, said Jammu and Kashmir DGP Dilbag Singh.
Singh added that Saifullah had been active since October 2014 and was associated with slain terrorist Burhan Wani for a long time.
“Security forces were monitoring his movement for two days,” he told reporters.
Singh added that over 200 terrorists have been eliminated in Jammu and Kashmir this year.
Addressing reporters, IGP Kumar said they had received information that Saifullah, who had come from south Kashmir, was hiding in a house.
“The security forces cordoned off the area and an operation was launched. In the exchange of firing, one terrorist was killed. According to our source, we are 95 per cent sure he is Dr Saifullah. We are retrieving the body and it will be identified soon,” Kumar told reporters.
Kumar called the killing of Saifullah a “huge success” for the police and security forces. “This is not a small achievement,” he told reporters at the encounter site.
Following information about the presence of terrorists there, an official said security forces launched a cordon and search operation in the area.
Asked whether any other terrorist was apprehended alive from the encounter site, he said a suspect has been taken into custody and is being questioned.
(ToI With inputs from agencies)