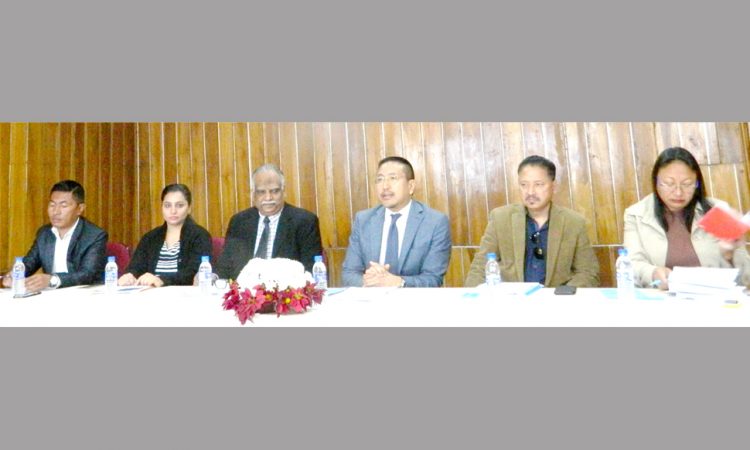 Kohima, February 16: The overall adult prevalence of HIV and AIDS in the country has come down from 0.4 per cent to 0.22 percent, said Deputy Director General of National AIDS Control Society (NACO), Dr Naresh Goel on Saturday here.
Though the prevalence rate has come down by half in the country, however the existing scenario of HIV and AIDS in the North Eastern Region remains to be high with states like Mizoram, Manipur and Nagaland having the highest prevalence rate at 2.04%, 1.43% and 1.15% respectively to be in the top three highest HIV and AIDS prevalent states in the country, the NACO official said.
Dr Goel revealed this in presence of Nagaland Principal Secretary for Health and Family Welfare Department, I Himato Zhimomi and Nagaland State AIDS Control Society (NSACS) Project Director Dr Ngangshimeren at a press conference here today.
Dr Goel said that concerned with the high prevalence rate in the region, NACO will be conducting the first North East Multi Media Campaign, a special package exclusively for the eight sister states in at Kohima local ground on February 18 to be hosted by NSACS.
Themed “North East united against HIV/AIDS”, the campaign aims towards greater visibility for the issue of HIV/AIDS, encourage safe and responsible behavior among the youth, reduce the level of stigma and discrimination by demystifying HIV/AIDS, promote HIV/AIDS related services, specially HIV testing and increase general awareness about HIV/AIDS.
The HIV positive rate being high among the age group of 15-24 years, which stands at 19%, he said that the target group for the campaign would be this group of youths.
The bands participating from the eight states are -The Megh of Arunachal Pradesh, Tyrrhenian of Assam, The Wishes of Manipur, Wreckless Shadow of Meghalaya, Jerry Lalrinawma of Mizoram, Luli Yeptho & the Band of Nagaland, Roll Heads of Sikkim and Vanghmun 100 Yrs Band of Tripura.
He said that these bands are the winners of the Multi-Media Campaign conducted by the respective State SACS.
The campaign is a special package provided exclusively for the state of North East since 2009 by the NACO. It is conducted every year in the North Eastern States to promote awareness, compassion, education and support for the issue of HIV and AIDS in the region.
Meanwhile, on the concern expressed over the decision of the Nagaland Government to withdraw the financial support of Rs 1 lakh per MLA towards advocacy works of HIV/AIDS made through Nagaland Legislative Forum on HIV/AIDS, Dr Goel asked the NSACS PD to put forth the proposal to the NACO for enhancement of financial support even if NLFA withdraws it.
On the shortage of medicines at ART centre in the State, he asserted that the supply chain management has been changed and hence forth availability of stock would not be a problem. He also informed that NACO would soon be introducing IT based system to check the availability of medicines in the centres throughout the country.
Nagaland Minister for Health and Family Welfare, S Pangnyu Phom will inaugurate the campaign at 9 am on Monday.
Beside the band competition, other highlights include exhibition stalls on HIV, distribution of IEC materials, food stalls, HIV testing facility, blood donation camps, free merchandise etc.
Special appearances during the campaign would be made by Alobo Naga, Dreamz Unlimited, Nise Meruno and Tetseo Sisters.
NSACS Project Director Dr Nganshimeren informed that in according to the later Strategic Information Management System (SIMS) date from April 2018 to September 2018, 91% of the route of transmission in Nagaland is through sexual route, 5% through syringe and needles and 4% through Parent to Child.
He said till August 2018, Nagaland has 24,039 people living with HIV/AIDS out of the total of 10,68,882 blood screened.
During the period April to August 2018, Dimapur district had the highest positive prevalence rate at 5.71%, followed by Tuensang at 3.59%, Kohima at 2.17%, Kiphire – 1.35%, Peren – 0.98%, Mokokchung – 0.91%, Wokha – 0.82%, Zunheboto – 0.74%, Phek – 0.71%, Mon – 0.34%.
Longleng is the only district which did not have any HIV positive cases out of the 977 blood tested during the same period.
A cumulative data on Antiretroviral Therapy (ART) status till August 2018 revealed that a total of 17,315 HIV infected persons have registered on ART while 12,190 have started it. Number of patient dead is 1609 while those on alive and on ART are 7663.
Asked on the status of framing state specific policy on HIV/AIDS control and prevention, Dr Longkumer informed that the process is in final stages and it is presently with the Law and Justice department for review. (Page News Service)