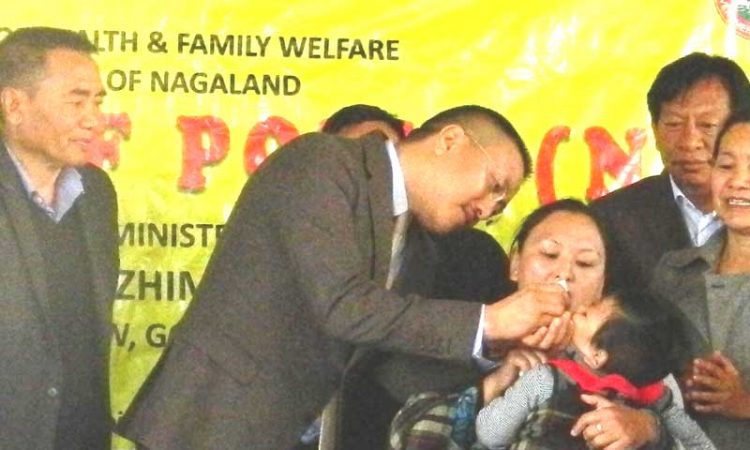 Kohima, March 10: Along with the rest of the country, the Nagaland Health and Family Welfare Department on Sunday launched Poli – Naitonal Immunization Day for the year.
Principal Secretary of Health and Family Welfare, I Himato Zhimomi administered the first two drops of life to an infant at Naga Hospital here marking the launch of the three-day long programme.
“The Department is targeting to administer polio drops to all eligible children from 0-5 years throughout the State in 2,274 polio booths manned by 9096 health personnel and 455 supervisors along with vaccines and other logistics,” said Managing Director of Naga Hospital, Dr Thorhusie Karity.
Special focus will be given to migrant population with an aim to prevent importation of polio cases, he said, adding that today the polio drops are being administered at the booths the medical staffs and volunteers engaged on immunization duty would be going house to house campaign to check whether the eligible children have been immunized.
He also said that India has remained free of wild polio cases since January 2011 and India’s unprecedented progress against polio has led to certification of south east region including India by WHO in March 2014.
India remains at high risk of importation till the whole world is free of wild polio virus, he said, adding that as per the recommendations of the India Expert Advisory Group on Polio National Immunization Days are to be conducted covering all the children in the age group 0-5 years of use using bOPV.
Marking the occasion, the Department also felicitated various organizations and district administrations in the successful completion of the massive Measles Rubella Vaccination drive conducted during October-November 2018, wherein the State immunized over 97% of the children between the age group of 9 months to 15 years.
Dimapur: Along with the rest of the country, Dimapur District observed Intensive Pulse Polio Immunization 2019 on Sunday. Dr. K. Vikato Kinimi, Chief Medical Officer launched the Polio Sunday by administering the first two drops of polio.
Dr Rebecca Y. Sema informed that although in India, the last case of polio was recorded in 2011 and WHO had declared the country being declared Polio-Free since 2014, the Government of India continues to launch polio programme to maintain the polio free status from the country and India continues to maintain a strict polio surveillance system as two of neighbouring countries are still polio-endemic countries.
Dr. K. Vikato Kinimi, Chief Medical Officer, Dimapur encouraged the medical staffs and volunteers and said, ” when you are administering two drops of polio to a child, you are protecting him and that you are doing a noble job.” He appreciated all the medical staff and volunteers for the constant co-operation and contribution towards sustaining polio Free- status from the district.
After the polio inaugural function, certificate of appreciation was awarded to private schools association, Lions’ Club and Blue Vanda, Dimapur Brick-Kiln Union, SBI Dimapur, Dimapur Christian Forum, Hindu Samaj, Muslim Council, and Jain Samaj for their contribution and support during the Measles-Rubella Vaccination Campaign held in 2018.
MCD: Members of Muslim Council Dimapur also participated in Intensive Pulse Polio Immunization 2019 at a booth at New Market along with the rest of India on Sunday.
IWC: Inner Wheel Club of Dimapur led by president Neelam Sethi also provided polio drop to kids at Delux Point junction.