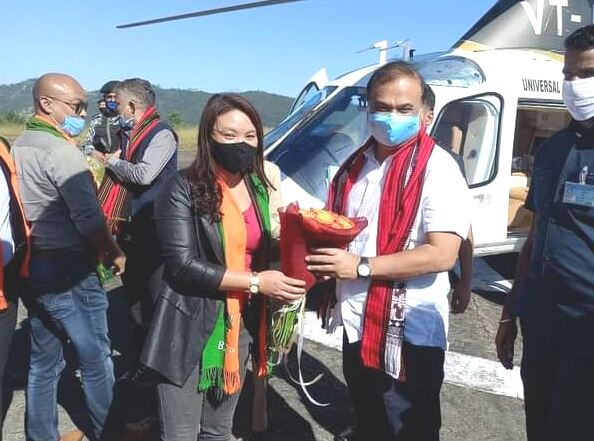 Convener of the Northeast Democratic Alliance (NEDA), Himanta Biswas Sarma being received at Kohima on Sunday.

Reportedly, Sarma, who is also the Union Government’s emissary to the Naga peace process, was in the State in an effort to sort out the differences amongst Naga leaders. His visit is against the backdrop of differences between the State Government and the Opposition Naga People’s Front (NPF) over Joint Legislators’ Forum (JLF), with the NPF legislators refusing to rejoin the JLF.
Sarma’s visit to Nagaland also assumes significance as he, along with Rio and Opposition Leader TR Zeliang, had held discussions on the knotty Naga political issue with Union Home Minister Amit Shah in Delhi on October 20.
Both Rio and Zeliang have reiterated to play the role of active facilitators but are yet to resolve their differences. They have also reiterated to pave away for any alternative arrangement.
Recently Union Home Minister, Amit Shah had asked NPF to rejoin the JLF. But Zeliang has suggested to Rio to dismantle the JLF and constitute a Parliamentary Working Committee, which was not accepted by the People’s Democratic Alliance (PDA) – a conglomeration of NDPP, BJP and an Independent.
Rio also asked the NPF to endorse the October 15 resolutions on Naga talks during the consultative meeting with civil society organizations and tribal hoho representatives. NPF had abstained from the meeting.
The Centre has asked Opposition and the State Government to jointly work to break the deadlock between the Centre and the National Socialist Council of Nagalim (NSCN) arising out of demand for a separate flag and the constitution.
NDPP secretary general and Advisor to Nagaland CM, Abu Metha, along with leaders of the ruling Nationalist Democratic Progressive Party and BJP, received Sarma at the helipad here, from where he went straight to the CM’s residence and flew back to Guwahati after the meeting.
He did not meet the Opposition leader today, sources said.
“It was only a courtesy call to Chief Minister Rio and no serious discussions were held,” Sarma told an electronic news channel NE Live.
“There are a set of Government officials, who are engaged actively with the NSCN (IM)’s collective leadership and I am convinced there will be some good news at some point of time. But these are very complex issue… you cannot get a solution just out of one, two or three meetings, this is a complex issue and you need to resolve it bit by bit”, said Sarma.

“The officials in the Ministry of Home Affairs and the NSCN (IM) are making progress but what is happening or what has happened or what would happen will be difficult for us to comment at this stage”, he said.
“Solution has to be one, but let the discussions be concluded with NSCN (IM) first and then we will take the common draft to everybody… we should go step by step”, added Sarma.
(Page News Service)