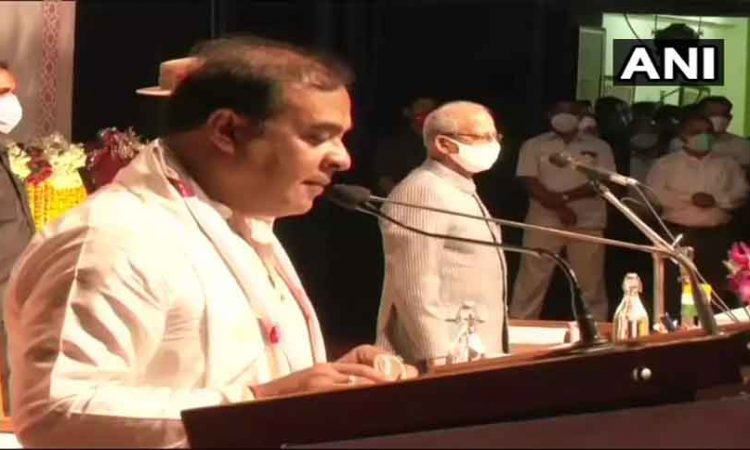 Guwahati, May 10: North East Democratic Alliance (NEDA) convenor Himanta Biswa Sarma was on Monday sworn-in as the 15th Chief Minister of Assam by Governor Jagadish Mukhi at the Srimanta Sankardeva Kalakshetra here.
Sarma, clad in traditional ‘pat silk’ dhoti and kurta with a muga ‘gamosa’ draped around his neck, took the oath of office and secrecy in Assamese.

Along with him, 13 other legislators were also sworn- in as ministers amid strict COVID-19 protocols.
Among the MLAs sworn-in, 10 from the BJP, including state party president Ranjeet Kumar Dass and ministers of the outgoing government Chandra Mohan Patowary, Parimal Suklabaidya, Jogesh Mohan and Sanjay Kishan.
The new faces as ministers were Ranoj Pegu, Bimal Borah and the only woman in the cabinet, Ajanta Neog.
Alliance partner AGP’s Atul Bora and Keshab Mahanta, both ministers in the erstwhile government, and former Rajya Sabha MP U G Brahma of the UPPL, also took oath.
BJP president J P Nadda, outgoing Chief Minister Sarbananda Sonowal, Union ministers Jitendra Singh and Ramesh Teli, Nagaland Chief Minister Neiphu Rio and Assam Congress chief Ripun Bora were among those present at the swearing-in ceremony.
Of the 126 assembly seats in Assam, the ruling alliance secured 75 seats with the BJP winning 60, the AGP (9) and the UPPL (6).
PM Modi, Shah congratulate Sarma on taking oath as Assam CM
Prime Minister Narendra Modi on Monday congratulated Himanta Biswa Sarma on taking oath as Assam chief minister, and expressed confidence that he and his team of ministers will add momentum to the development journey of the state and fulfil people’s aspirations.
In his tweets, Modi also had a word of praise for Sarma’s predecessor Sarbananda Sonowal, saying his “valued colleague” was at the helm of a pro-people and pro-development administration over the last five years. His contribution towards Assam’s progress and strengthening the party in the state is immense, the prime minister said.
“Congratulations to @himantabiswa Ji and the other Ministers who took oath today. I am confident this team will add momentum to the development journey of Assam and fulfil aspirations of the people,” Modi said.

Other BJP leaders also joined Modi in congratulating Sarma and his ministerial colleagues with Home Minister Amit Shah saying that under the prime minister’s guidance and Sarma’s leadership, Assam will set a new benchmark of peace, progress and prosperity. (PTI)