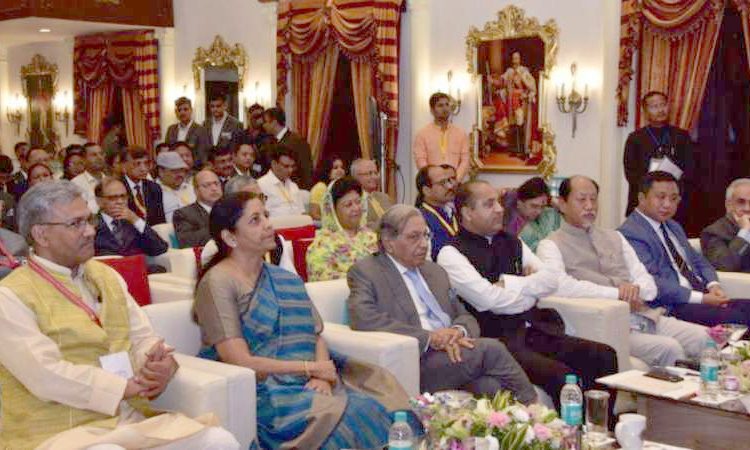 MUSSOORIE, July 28: Himalayan states on Sunday came together at a conclave here to demand a separate ministry to deal with problems endemic to them and a green bonus in recognition of their contribution to environment conservation.
The twin demands formed part of a common agenda of the Himalayan states which was handed over to Union finance minister Nirmala Sitharaman at the end of the conclave, Uttarakhand chief minister Trivendra Singh Rawat told reporters after the event.
Ten out of 11 states took part in the conclave. It is for the first time that the Himalayan states have come on a single platform to take a unanimous stand on the issue of green bonus and demanded a separate ministry to deal with problems unique to them.
Explaining the rationale behind the demand for a green bonus, Rawat said most of the country’s rivers originate in the Himalayas and therefore, the Himalayan states have to play the most significant role in the prime minister’s water conservation initiative.
He said it was also necessary because the Himalayan states’ contribution to environmental conservation was the biggest with all their green cover.
The Himalayan states were also at a disadvantage because large swathes of land fell into ecosensitive zones where all sorts of development activities could not be carried out.
A green bonus thus is needed to compensate the Himalayan states for their disadvantages, Rawat said. After deliberations which lasted nearly six hours, a “Mussoorie resolution” was passed at the conclave making a collective pledge to conserve and protect their rich cultural heritage, bio-diversity, glaciers, rivers and lakes besides making their own contribution to the nation’s prosperity.
Earlier, addressing the conclave as the chief guest, Sitharaman said a conference like this was long overdue as it was bound to play a crucial role in the development of the Himalayan states which is one of the priorities of the Centre.
Special efforts will have to be made to stop migration from border areas and Panchayati Raj institutions can play a big role in achieving this goal, she said.
Describing people living in remote border areas as vital to the country’s security, the Union finance minister said basic facilities will have to be provided to them to stop migration from the hills.
Underlining the importance of environmental security, she said hill states should focus on organic farming and connect the local youth with the activity.
“Start-ups can also be very important for the youths living in hill areas. It will not only help stop migration but also bring about economic prosperity in such areas. Empowering local communities is very important for the success of development schemes,” Sitharaman said, adding that the development roadmap suggested by the participating states will be considered seriously.
Rawat said Uttarakhand felt proud to host an event like this for the Himalayan states. It was also decided that the conclave will be held every year.
Chairman of the 15th Finance Commission N K Singh termed the conclave as historic saying it will help in putting forward the problems shared by the Himalayan states and framing policies to solve them.
Himachal Pradesh chief minister Jairam Thakur said life is difficult in the hill areas. The problems faced by the hill states are different from other states.
“Boosting air and rail connectivity in the hill states should be a priority. Considering limited resources at their disposal they should also get precedence over other states in getting financial assistance from the Centre,” he said.
Chief ministers and representatives of the Himalayan states — Jammu and Kashmir, Uttarakahand, Himachal Pradesh, Sikkim, Arunachal Pradesh, Meghalaya, Nagalaland, Tripura, Mizoram and Manipur — took part in the conclave. The only absence was of Assam, which has been ravaged by the floods.(PTI)