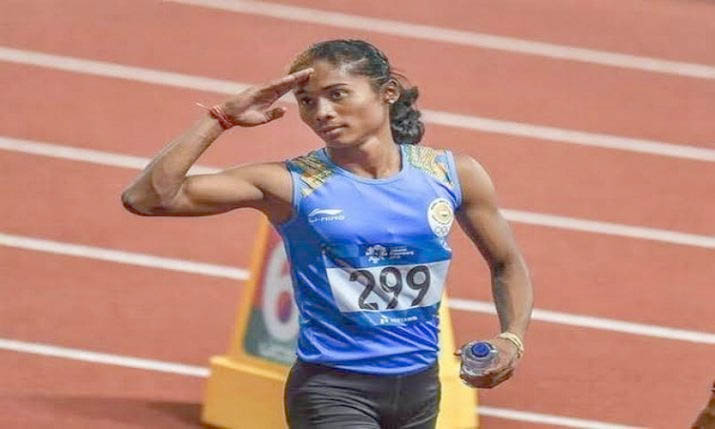 NEW DELHI, JULY 18: Star Indian sprinter Hima Das clinched her 4th gold of the fortnight as she won the 200m race with a creditable time in the Tabor Athletics Meet in Czech Republic on Wednesday.
Hima won in 23.25 seconds though the race had a mediocre field with most of the competitors representing clubs of Czech Republic. Nonetheless, she is inching closer to her personal best of 23.10, Hima’s compatriot VK Vismaya was 2nd with a season best 23.43.
This was 19-year-old Hima’s 4th gold since July 2 when she ran her first competitive race in Europe. She has been keeping on improving since her first race. In her first competitive 200m race of the year, the 19-year-old Assam runner had clocked 23.65 seconds on her way to gold at the Poznan Athletics Grand Prix in Poland on July 2. After that, she won her second 200m gold at the Kutno Athletics Meet, also in Poland, on July 7 with a time of 23.97 seconds.
On July 13, she won her third 200m gold at the Kladno Athletics Meet in Czech Republic with a time of 23.43.
Hima’s pet event is 400m and she is yet to qualify for the World Championships in both the quartermile event and the 200m.
The World Championships qualifying time for 200m is 23.02 while it is 51.80 in 400m.
In men’s 400m, Muhammad Anas won in 45.40 seconds in a mediocre field while compatriots Tom Noah Nirmal came 2nd with a season best effort of 46.59. KS Jeevan was 3rd in 46.60 and MP Jabir finished 4th in 47.16.
On July 13 at Kladno, Anas had bettered his own 400m national record to clinch a gold and qualify for the World Championships by clocking 45.21 seconds.
The World Championships qualification time is 45.30 seconds in men’s 400m race. (PTI)

Need to force myself to the limit when I play against Saina and Sindhu: Carolina Marin

Govt leaves up to states to decide ‘independently’ about resuming sports

Four games a day confirmed for 2022 World Cup in Qatar

PM to address High-Level Segment of UN ECOSOC on today