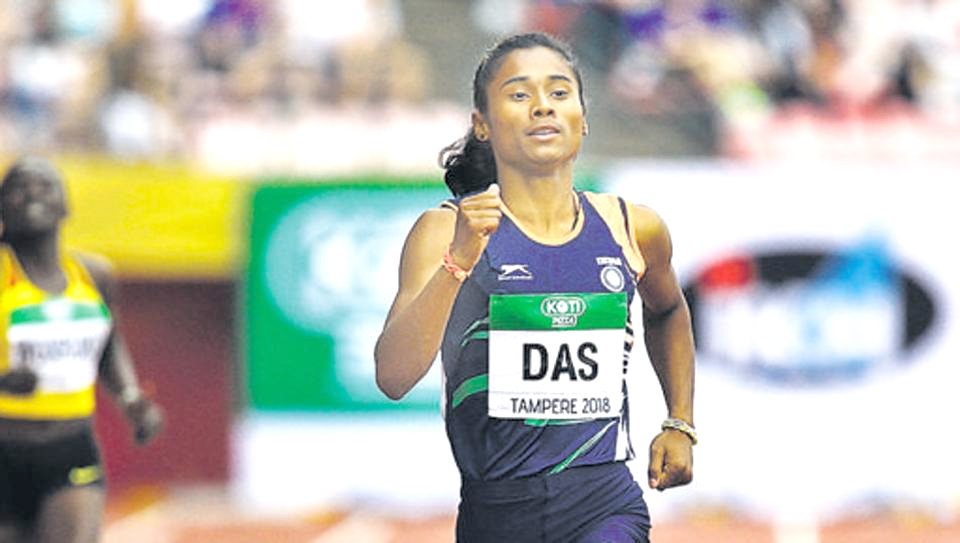 NEW DELHI, September 13: World junior champion Hima Das’ participation in the World Championships relay events became a matter of intense speculation on Friday after she was left out of the initial entries even though her name can still be added by September 16.
The Athletics Federation of India (AFI) had on September 9 named seven women, including Hima, for the 4x400m relay and 4x400m mixed relay races. But it is learnt that Hima’s name was missing in the initial entry of Indian women athletes for the two relay races submitted by AFI to the IAAF for the September 27 to October 6 showpiece event in Doha.
Jisna Mathew, MR Poovamma, Revathi Veeramani, Subha Venkatesan, VK Vismaya and Ramraj Vithya have been entered for the women’s 4x400m relay, while Hima’s name is missing.
The 19-year-old Assamese runner was also not entered for the 4x400m mixed relay race. Jisna, Poovamma and Vismaya were named along with Jacob Amoj, Muhammed Anas and Noah Tom Nirmal.
The AFI has till September 16 midnight to include Hima in the two relay teams in place of another runner but not after that. The IAAF allows only six names to be entered for the relay races but the AFI had named seven women.
The non-inclusion of Hima in the initial list has put a question mark on her participation as she has been suffering from lower back pain after the Asian Games last year.
She pulled out of the individual 400m heats during the Asian Championships in Doha in April midway through the race.
At that time, deputy chief coach Radhakrishnan Nair had said that the injury was a lower back spasm (at L4 and L5, two lowest vertebrae in the lumbar spine).
Even during her ongoing training stint in Europe, as part of preparations for the World Championships, she has run just one 400m race as she is learnt to be in pain while running longer distances.
Between July 2 and 20, Hima won four gold medals in 200m and one yellow metal in 400m at sub-par races in Europe.
In August, she won a gold in 300m. She could not qualify for the World Championships in her pet event of 400m, with her season’s best remaining at 52.09sec as compared to personal best of 50.79.
AFI president Adille Sumariwalla said he is not aware of any decision on Hima’s participation in the World Championships.
“I have no information of Hima’s latest condition as she is in Europe. There is a doctor with the team in Europe and if she is not fully fit she will not take part (in the World Championships).
“If she runs and pulls out midway, the (relay) team will suffer. She will have to be fit to run the race. Also, she is just 20 and it is better to preserve her for the Olympics. She is young and talented and she will peak by the time of 2024 Olympics, so we should not put undue pressure on her,” he said. (PTI)