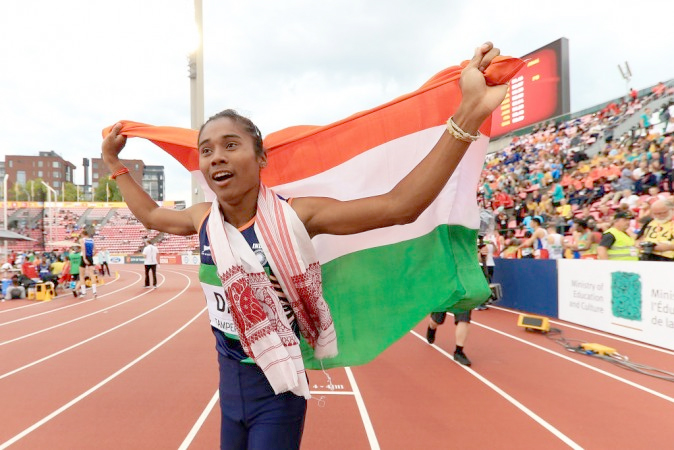 New Delhi, July 13: Just 18 months after running her first competitive race – an inter-district meet in Sivasagar, Assam – 18-year-old Hima Das has created athletics history. The daughter of a rice farmer from Dhing village in Nagaon district, she got India its first ever track gold at a global event by winning the 400 metre final at the World U20 Championships in Tampere, Finland.
Tense on the starting block, Hima started slow and trailed on the home stretch, but her blazing run in the final 80m, where she overtook three rivals, saw her clocking 51.46 seconds.
In Guwahati, her coach Nipon Das says he wasn’t worried when Hima wasn’t among the top three at the final curve. “Her race begins in the final 80 metres. Her progress just shows how much potential she has. It has been just two years since she first wore spikes,” says the coach about her ward whose personal best is 51.13 seconds.
With this win, Hima joined an elite club of Indian athletes who have won medals at the World U20 Championships. But she is the only runner in a hall of fame that has throwers like Seema Punia (bronze, discus), Navjeet Kaur Dhillon (bronze, discus) and Neeraj Chopra (gold, javelin).
Hima started off with football, kicking the ball with boys in the mud pits next to the rice fields. She was then advised by a local coach to take up athletics.
Soon, the teenager was spotted by Nipon, an athletics coach with the Directorate of Sports and Youth Welfare, during an inter-district meet. “She was wearing cheap spikes but she won gold in the 100 and 200. She ran like the wind. I hadn’t seen such a talent in ages,” Nipon says.
The coach asked Hima to shift to Guwahati, 140 km from her village, and convinced the youngster that she had a future in athletics. Her parents, Ronjit Das and Jomali, were initially reluctant to let the youngest of six children leave. But with Nipon not ready to hear a no, they relented.
Nipon arranged for Hima to stay in a rented accommodation near the Sarusajai Sports Complex. He eventually convinced officials to induct her into the state academy, which specialised in boxing and football. “There was no separate wing for athletics but the officials were open to Hima being part of the academy after seeing her performances. Assam is not known to produce runners,” he says.
Nipon has been a constant guiding force. “I keep telling Hima only one thing: Dream big. Because only a few are blessed with God-given talent. My aim was to try and make sure she is part of the relay team for the Asian Games. But she has surpassed all expectations by winning a world championship gold in the individual event.” (Courtesy: IE)