High-voltage campaign for Karnataka elections ends, voting on May 12 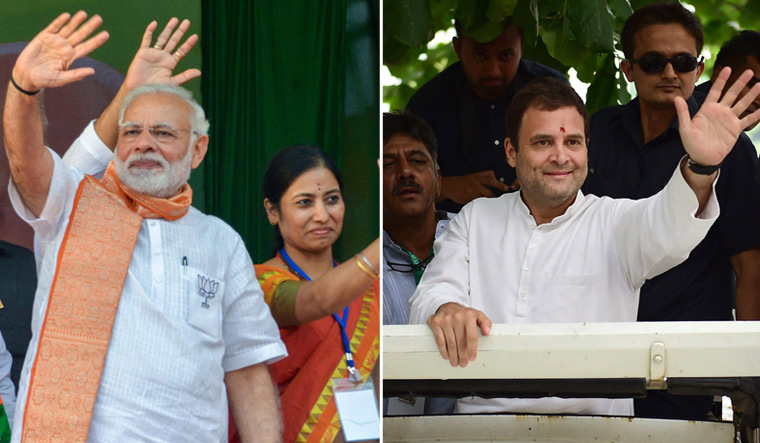 Bengaluru, May 10: Bharatiya Janata Party (BJP) president Amit Shah, two of the party’s chief ministers, 19 Union ministers, and 12 other senior leaders of the party descended on Karnataka on Thursday, holding 52 road shows on the last day of campaigning for assembly polls in the state.
Congress president Rahul Gandhi made a pointed reference to this in a press conference on Thursday: “This is a fight between the spirit of Karnataka and the RSS (Rashtriya Swayamsevak Sangh) and we are very clear we don’t want a barrage of leaders from outside the state to come and fight for us.”
The Congress, in power in the state, and the BJP have been locked in an intense and bitter campaign. The former has used “outsiders” in its campaign, including Gandhi, even his mother Sonia Gandhi, who campaigned after a hiatus of two years, but it has largely depended on incumbent chief minister Siddaramaiah.
The BJP, in contrast, has pulled out all stops, using its star campaigner, Prime Minister Narendra Modi, Shah, Uttar Pradesh chief minister Yogi Adityanath, and several cabinet ministers. It’s local face, former chief minister BS Yeddyurappa, whose temporary departure from the party was one reason for its loss in 2013, has been around, but just not as visible.
Prime minister Modi, who held 21 rallies in the state between May 1 and May 9 – he was originally supposed to hold 15 – was not on the campaign trail on Thursday, but he was very much around, addressing Dalit workers of the BJP in Karnataka through his NaMo app.
That disclosure attracted the Modi’s ire, and he played on the Naamdaar-Kaamdaar (dynast, worker) distinction he has made his own during this campaign.
Modi also played up Rahul Gandhi’s foreign origin, and on May 1, asked him to speak on the achievements of the Karnataka government for 15 minutes in any language, including his “mother’s mother tongue.” The Prime Minister was responding to an earlier remark by Gandhi, challenging Modi to a 15-minute face-off in Parliament.
On Thursday, Gandhi termed Modi an angry man (and himself a lightning rod for anger), and said his mother, who is Italian by birth, is more Indian than many Indians he know. “She is more Indian than many people I have seen. She has sacrificed and suffered for this country and it shows the quality of the prime minister when he makes these comments. I’m happy to let him be if he enjoys himself.”
He also disagreed with the Modi, who had asked the Congress not to politicise rapes and said there were fundamental political issues that affected 50% of the country’s population, targetted the BJP’s state leaders, including Yeddyurappa, and the Reddy brothers for corruption, and said Modi had done nothing for farmers.
Gandhi said the BJP was “in panic”.
Shah said in a tweet that “the writing on the wall is clear; It’s time for BJP with absolute majority in Karnataka.”
Opinion polls expect the May 12 elections (results will be declared on May 15) will result in a hung house; most polls expect the Congress to be the single-largest party, though. A hung house could bring the Janata Dal (Secular) of former prime minister HD Deve Gowda, the third party in the fray in the state, into play.
On Thursday, the chief minister of Chattisgarh Raman Singh and the chief minister of Madhya Pradesh Shivraj Singh Chouhan campaigned for the BJP in Bengaluru and Mysuru respectively.
Defence minister Nirmala Sitharaman, rail minister Piyush Goyal, petroleum minister Dharmendra Pradhan, and commerce minister Suresh Prabhu were among the prominent ministers campaigning in the state on Thursday. (Agencies)