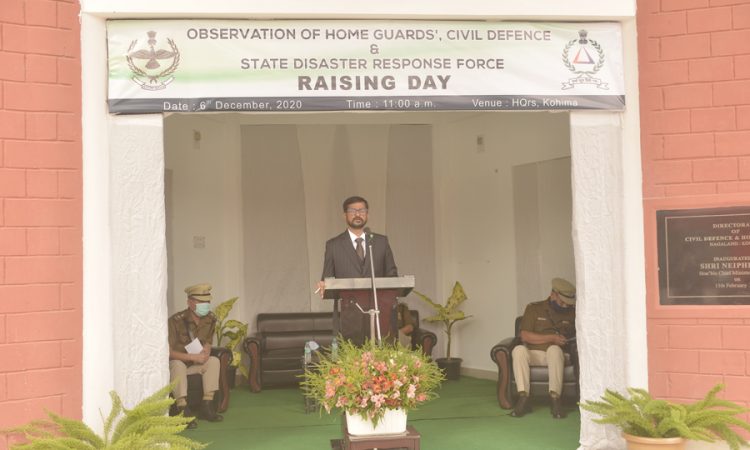 DIMAPUR, DECEMBER 6: The Nagaland Home Guards: Civil Defence and State Disaster Response Force (SDRF) observed its 58th Raising Day on Sunday at its headquarters in Kohima. The annual Raising Day celebration was marked by only a short formal programme unlike previous years because of the ongoing COVID-19 pandemic.

The Civil Defence in Nagaland preceded the Home Guards Organization. The Nagaland Home Guards Organization was formally established on March 1, 1988 by an ordinance of 1987 under the Home Department with the then Home Commissioner as ex-officio Commandant General. A Deputy Commandant General headed the organization at the HQ level. This arrangement continued till October 1991 when a regular officer was posted from the IPS with S Akang Jamir (IPS) as the first Director General and late Sitlhou (IPS) as the first Commandant General,
The Nagaland Home Guards Acts of 1988 was passed by the State Legislature on May 12, 1988. Both Civil Defence and Home Guards organizations complement each other and co-exist under a common head of office. While Civil Defence deals with incidences arising out of external aggression to the country in general, the Home Guards deal with incidences arising out of internal security, natural calamities such as landslides, earthquake, fire, etc, strikes, communal disharmony, socio-economic and welfare activities.
Speaking at the formal programme on Sunday, SR Saravanam (IPS) ADG commended the Department for the excellent work it has been doing in aiding the State police in maintaining law and order as well as regulating traffic and importantly as first responders during times of calamities and disasters, be it natural or manmade. He lauded the SDRF for their unending sacrifice and hard work in the fight against COVID-19.
He admitted that it has been a tough year for the personnel but was happy that the SDRF have risen to the occasion and done an excellent job and performed much better than other States. He urged the SDRF personnel to work together cohesively as a team and mentioned that they had a huge responsibility to look after the safety and well-being of the citizens. He encouraged the Department to keep working and keep evolving, learning from past mistakes and failures and to be more active on social media platforms to create awareness among citizens.
Chairing the programme, Isaac Semy, Staff Officer (Hqrs), Medozhalie Pienyu, DCG presented a brief history and formation of the Home Guards Department in the State and how it had evolved over the years. He highlighted the various activities of the Department and the vital role it plays in aiding the State police in maintaining law and order and protection of important institutions.
He further acknowledged the selfless sacrifice and hard work of the SDRF personnel in the fight against COVID-19, who till today continue to be one of the most dedicated and hard working frontline workers. He also paid tribute to the lone SDRF personnel who succumbed to COVID-19 complications while in the line of duty and expressed that every Naga is indebted to him for his ultimate sacrifice.
The programme also witnessed a brief demonstration by SDRF personals on different rescue techniques during emergencies.
Dimapur:
Home Guards, Civil Defence and State Disaster Response Force, Dimapur, celebrated its Raising Day at District Commandant Office Dimapur, on December 6.
During the function, District Commandant, HG, CD & SDRF, Y Khenito Chishi highlighted when and how the organization was formed in the country, the role played by the organization and the effortless contributions during pandemic.
To mark the day, a demonstration on sliding stretcher from ladder, emergency method of rescue and donning and doffing of PPE kits were displayed by SDRF personnel.
The programme was chaired by Company Commander, Lichemse Sangram.
Other highlights of the day included invocation prayer by Hav. Angukato, reading of VIP messages by Hav. Lipoksashi, special song by L/nk. Chuwachu and presentation of DG Commendation Certificate to 6 staff and personnel and a Barakhana.
(Page News Service)