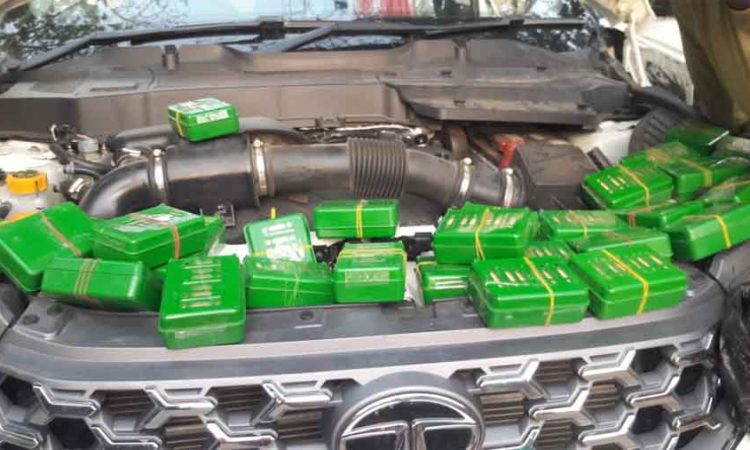 After interrogation of the accused, 40 more pieces of soap cases were recovered from secret chamber of the vehicle.
In connection, the accused have been booked at Dillai PS Case No 13/2021 u/s 21(c)/29 NDPS Act.
Talking to Nagaland Page, SDPO John Das APS said, “During the interrogation, the accused said that he was transporting the drugs from Manipur and after intense grilling, he divulged that there are some more secret chambers in the vehicle and so we made a thorough search and found another 40 packets of heroin weighing 445 grams kept in soap cases which were opened today morning in presence of witnesses.”
Commenting on the total numbers of soap cases recovered, he said 70 soap cases containing heroin were recovered yesterday during the checking and another 40 pieces were recovered after interrogation.
“In total 110 boxes containing suspected brown sugar were recovered. The international value would be around Rs 8 Crore”, he said.
John Das said that the Naka was set up by OC Dilai PS Bitupan Chutia and ASI Jiten Gogoi. 70 boxes drugs were seized under his physical supervision and the other 40 boxes were seized under the physical supervision of Nahid Krishma, APS, Dy SP HQ Karbi Anglong, he added.

The accused revealed that he was transporting the brown sugar to a dealer in Guwahati, he said.
John Das said that the drugs peddler, however smart they may assume to be, they will be caught while entering the Assam check gates and urged youths to shun drugs. (Page News Service)