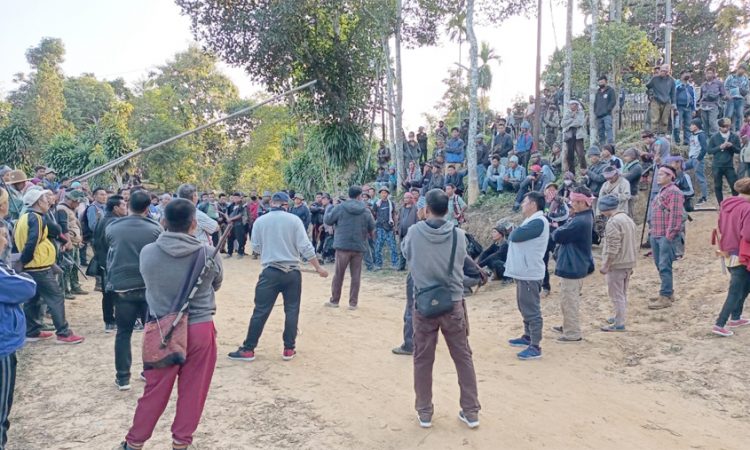 KOHIMA, DECEMBER 9: A day of heightened tension along the Assam-Nagaland border along NH-702(D) on Wednesday ended with the lifting of the economic blockade imposed by Assam-based organizations since November 15 last. However, Naga villagers living in the border area are yet to decide whether they will lift the economic blockade from the Nagaland side.

Reportedly, anxious Nagaland State authorities went into overdrive to defuse the situation after a video showing hordes of people of Nagaland, armed with machetes and firearms, rallying at a check-post on the Nagaland side of the border, went viral. Naga villagers living along the border had reportedly got armed to protect their ancestral lands after some Assam-based organizations, had on December 8 night, reportedly threatened to march to the Nagaland Armed Police (NAP) outpost, situated less than 4 kilometres away from Aosenden village and remove the outpost.
An official of the Tzurangkong Range Naga Youth Front (TRNYF) today confirmed that the viral video showing hordes of armed people from Nagaland at a border check-post was authentic, declaring that Naga villagers will go all out to protect their land.
The TRNYF official revealed that the Front received news that Assam-based organizations from Mariani, New Sonowal and Nagajanka area had issued a 72-hour ultimatum on December 5 in Assam local news outlets demanding removal of the NAP Outpost and a bridge situated less than 4 kilometres away from Aosenden village.
He claimed that the news was followed by a warning that failure to fulfill their demands would result in removal of the said structure by the public of Assam. Following expiry of the ultimatum on December 8, a public announcement was made in and around Mariani on the same night stating that citizens of Mariani, New Sonowal and Nagajanka areas will go to the place of contention and remove the outpost as well as the bridge, he claimed.
The TRNYF, on learning about this new development, mobilized a thousand citizens from the areas under Tzurangkong range and went to Aosenden village on December 9, he informed.
The group halted at Aosenden village on the advice of leaders present on the site, he said.
In order to prevent any escalation of the situation, public leaders from Nagaland side went down to the Assam Police Camp at Longtho and met with the Commander of the Assam police posted at the outpost, the TRNYF official said.
In the meeting with the Commander of Assam Police at Longtho, leaders from Nagaland side asserted that Assam Police have no right to set up camps within the areas that falls under Nagaland and the leaders further requested that the Assam Police camp be removed at the earliest without giving them a deadline, he said.
The TRNYF official mentioned that in response to the request made by the leaders from Nagaland, the Commander said he was not there for any ulterior motives but just performing his official duty and promised to relay the message to his superiors.
While the day ended with the lifting of the economic blockade from 4 p.m., the TRNYF has communicated to the Nagaland administration that imposition of economic blockades on their (Assam side) whims and fancies should be really looked into when the demands made by TRNYF are not fulfilled, he said.
“Therefore, while the blockade has been lifted from the Assam side, TRNYF is yet to arrive at a decision in regard to whether the economic blockade should be lifted from the Nagaland side, and it will be done only after the authorities of Nagaland gave assurances that our demands are fulfilled,” he said.

In this connection, TRNYF has communicated to the Border Magistrate and he has responded that the State authorities are working to resolve the issue at the earliest.
“As of now, there will be an executive meeting tonight where our further course of action will be deliberated on”, TRNYF official informed.
(Page News Service)