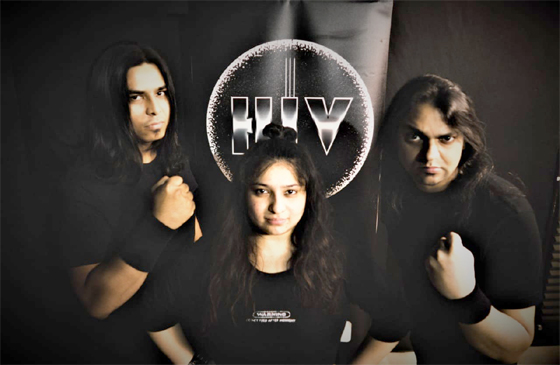 Prasanjit Dutta
DIMAPUR, JUNE 19: It was in 2006 when Abhishek Sharma and Rohan Kumar, while studying engineering at Ambala, Haryana, away from their homes at Dimapur, came up with the idea of forming a band and the result was HIV, a heavy metal band.
Fifteen years later, the band is now all set to move its entire studio to Dimapur.

Speaking to Nagaland Page over the phone about the plan that is set to trigger once the pandemic is brought under control, Rohan Kumar, the band’s vocalist and guitarist, said that geographically, the music scene is mostly active in the Northeastern part of the country right now with a number of big festivals including Hornbill and Ziro happening.
And having the studio at Ambala puts limitations because of distance and finances; and the band aspires to reach out to these festivals in no time.
Since its formation, the band has performed in Campus Rock Idols (2007, 2008), IET Bhaddal, NIT Kurukshetra, NIT Jallandhar, Amity Noida, TIET Patiala, PEC Chandigarh, CEC Landran to name a few.
According to Rohan, while growing up in Dimapur, he was heavily inspired by heavy metal bands like Iron Maiden and Judas Priest and developed a lifetime’s liking for the genre.
He studied at Dimapur’s Holy Cross Higher Secondary School and Kendriya Vidyalaya Rangapahar.
HIV’s music talks about everyone’s journey between “dusk and dawn”, offering a buffet of emotions through the songs.
Rohan said that the theme of “being human and life”, though appears to be just a sentence, can “form oceans”, adding that everybody comes into the world with a purpose and one needs to fulfil that.
According to him, the band tries to carry this message through the songs; and the 3 albums (1 released and 2 upcoming) talk a little bit about it but much is still to come.
The band today has 4 members- Rohan Kumar (vocals, guitar), Abhishek Sharma (drummer), Subham Sen (Bass), and Sakshi Gulati (sound engineer and production).
Since the inception of the band in 2006, the members have been constantly working on building an ecosystem that could enable them to be independent.
The band also had Rahul Sharma (guitar) and Manish Chettri (bass) as former members.
Rohan explained that in India not many bands evolve into full-time professional and earning bands; and the primary reason for that is the lack of seriousness and accumulating the required equipments that form the ecosystem “which HIV has been capable of forming over the years” and the band can now do shows without any support.
“We don’t have a Plan B”, he declared and added that everyone who has a dream should also be solely focused on making their dream happen without having a Plan B, because “you only live once.”
The band has been continuously following the music scene in Nagaland and was trying to be a part of the Hornbill festival in the 2020 edition, but this could not be possible because of the pandemic.
Nevertheless, it is looking forward to the future editions.
HIV’s long term plans include doing as many shows as possible in the country and develop industries related to music, which Rohan said has a huge potential and he himself uses a handmade guitar built by one of his friends in Nagaland.
Like other bands, HIV is also coping with the pandemic by performing online and, till now, has done 2 shows in collaboration with BookMyShow.

However, Rohan feels that there is nothing like an offline show which brings out the real essence of music and the online shows that the band is doing is not like others where bands are performing just in front of the camera but they have a complete setup, which is professionally managed “and perhaps it is the only band in the country which is doing so”.
It also has recently signed a deal with a soon to be launched YouTube channel “Spirit of Music” to perform in the launching event.
Further dwelling on the band’s intention to move to Dimapur, Rohan said that all the band mates are on the same page about it and explained that when the band was enlisted on BookMyShow, a lot of people from the Northeast, and particularly from Nagaland, approached it.
Once in the Northeast, HIV aspires to collaborate with local bands and facilitate in putting in motion music festivals like those of Europe’s which he believes can be easily done in India with the skill-set available, and only needs a push from the Governments.