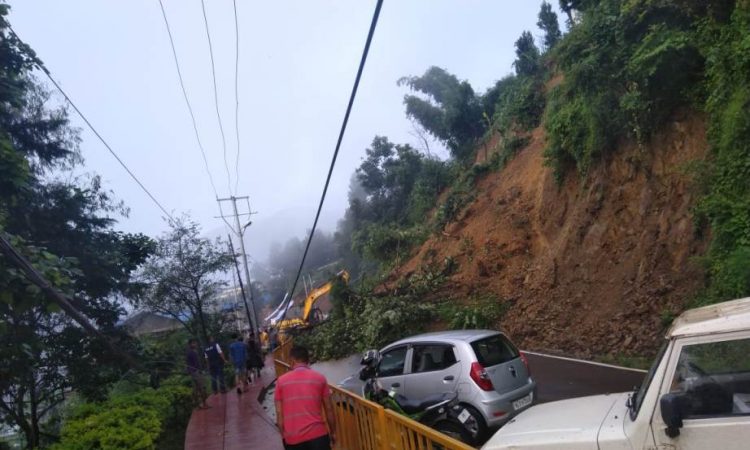 Kohima, August 4: Incessant rain in the State capital – Kohima this weekend has triggered landslide and mudslide in several places in Kohima and along the Kohima-Dimapur National Highway-29 putting vehicular movement out of gear.
Heavy downpour Saturday night resulted in cutting off National Highway-29 at Old KMC dumping area (before Jotsoma bye-pass). Hundreds of vehicles were seen stranded between the two cities, although some managed to take alternative routes that are also in pitiable condition.
Mudslides have occurred in several places along the NH-29 which is under construction for the four-lane road. Roads near the old dumping site of Kohima Municipal Council (KMC), some 5 km from Kohima, were also washed away. At least one vehicle was washed away early Sunday morning by rain water.
No vehicles can ply through the road unless the road is reconstructed with new alignment, sources said, adding that the repair works will take time and till such time the Jotsoma bye-pass route has to be used for small and medium vehicles.
Massive landslide also occurred near SKV petrol pump at around 1:30 am early Sunday morning, leading to road blockade during the day. District administration and the concerned department pressed excavators and dumper trucks to clear the road. Traffic was diverted the whole day while clearance works were underway.
On August 2 night, four members of a family including a minor girl child sustained severe injuries as the RCC wall collapsed upon their house due to landslide at Upper Bayavü Colony. The injured, identified as husband and wife Lohrü (65), Asorou (60), Asane (25) and Akhone (9) were rushed to the Naga hospital by the neighbours. The mother was reportedly in critical condition, with fractured arm, and is being kept in the ICU, sources said.
The house was also completely damaged, sources said.
Sources said a Tata Sumo parked by the road side rolled down about 30 feet only to be stopped at the damaged house while a newly constructed transformer platform was also pulled down in the landslide.
Meanwhile police has advised travelers to take Jotsoma by-pass road and 10 mile road for to and fro movement between Kohima and Dimapur. (Page News Service)