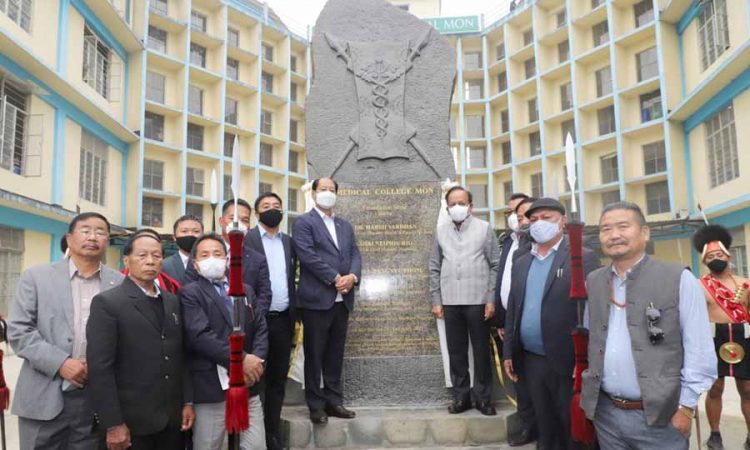 Speaking on the occasion, Vardhan underscored the holistic development of northeast being planned and carried out on the ground under the visionary leadership of Prime Minister Narendra Modi.
The laying of the foundation stone shows the commitment of the Government to ensure that the people of the most remote and interior parts of the country are not deprived of development, he said.
“This medical college is approved at a cost Rs 325 crore under Phase III of the centrally sponsored scheme for establishment of new medical colleges attached with existing district or referral hospitals.
“The project will have a central share of Rs 292.50 crore and is slated to be completed by 2023-24. The setting up of the new college in Mon, one of the most backward and farthest districts from the state capital, will help bring affordable secondary healthcare facilities to the doorsteps of nearly 2.5 lakh people,” Vardhan said.
Stating that 1,50,000 Health and Wellness Centres (HWC) are in process of development across the country, he said 370 such HWCs are under progress in Nagaland. He also urged the people and the State Government to ensure that all the poor are covered under Ayushman Bharat.
The Union Minister added that the Centre’s assurance of support to Nagaland and North East was not just in theory but out of pure intention and concern for the region.
The Minister also took time to highlight the great work done by Covid warriors who risked their own lives for the safety of all. He further acknowledged the State Government for tackling the crisis appropriately.
Expressing gratitude to the people of Mon for the heartwarming welcome shown towards him upon his arrival, Vardhan assured that the warm sentiments of the people of Mon shall be conveyed to the Prime Minister. He also congratulated Chief Minister Neiphiu Rio and Minister of Health & Family Welfare S Pangnyu Phom for the proactive steps taken towards bringing the project into reality.
Chief Minister Neiphiu Rio, while addressing the gathering, expressed gratitude to Prime Minister Narendra Modi and Union Minister Dr. Harsh Vardhan, and further acknowledged the presence of Dr Vardhan for the laying of the foundation stone. He stated that his presence exhibits the Government’s concern and commitment for the region.
Rio stated that with the completion of Mon Medical College, it would not only benefit Mon and Nagaland but also the neighboring States of Assam and Arunachal Pradesh and across the border into Myanmar. The CM stated that with the completion of the college, it will not only solve the problem of shortage of healthcare manpower but also provide the region with better healthcare facilities. Rio urged the people to make the college a centre of excellence and also think of ways to attract people to work and study there.
Minister of Health & Family Welfare, S Pangnyu Phom stated that Nagaland has never had the privilege of having 2 medical colleges being sanctioned by the Centre. He stated that the desire to establish medical college was not only to produce more manpower but also to enhance healthcare delivery.
Pangnyu recalled that Nagaland at the time of statehood inherited a deplorable state of health care facility, but over the year’s healthcare in the State has improved although much is needed to be done. He stated that most of the private healthcare is concentrated in Kohima and Dimapur and the rest are dependent on public healthcare. He stated that due to lack of facilities and equipment in public health care, most people from the other parts of Nagaland are not able to avail proper healthcare services. However with the completion of Mon Medical College, he expressed confidence that healthcare delivery in the region would greatly improve.
Giving an overview of the project, Principal Secretary Health & Family Welfare Amardeep S Bhatia, IAS stated that 30 acres of land had been acquired and contour survey and sub soil strength/ geological survey has started and likely to be completed within a month. He stated that the project would be on a turnkey basis and would function/operate on a PPP model.

MP Lok Sabha, Tokheho Yepthomi, Konyak Union and Eastern Nagaland People’s Organization also spoke in the inaugural programme. Both KU and ENPO expressed gratitude to the PM, Dr Harsh Vardhan and the State Government and assured full support and cooperation towards the completion of the project. (Page News Service)