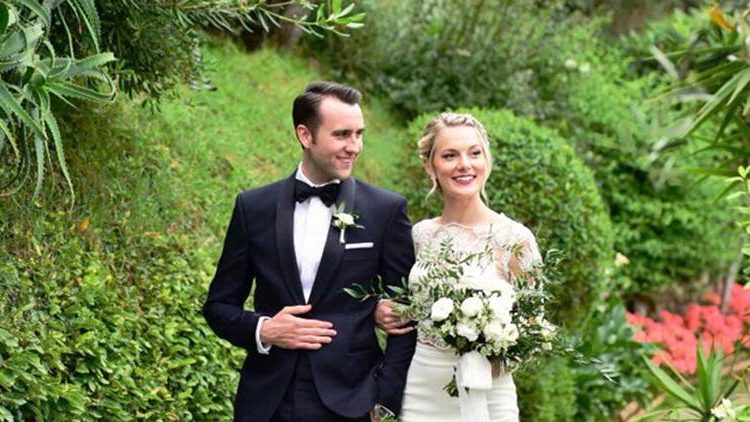 Popular for playing the hapless but loyal friend Neville Longbottom in the Harry Potter series, Matthew Lewis tied the knot with long-time beau Angela Jones. The British actor took to Instagram to share a lovely picture from his wedding day, captioned “GBUS” featuring his events planner wife in a stunning white trousseau.
While Matthew looks handsome in his sharp black tuxedo, Angela went for a beautiful white satin lace gown. But the highlight of the event was definitely Matthew’s hilarious tweet. The actor jokingly moaned about having to miss a concert by Arctic Monkeys and marrying his wife instead. His tweet reads as, “Not only did I miss @ArcticMonkeys in LA but they were performing in Italy at the same time we were there and my wife made me get married instead. Fuming.”
Matt’s co-star Tom Felton who played Draco Malfoy in the Harry Potter series was quick to comment on the Insta pic, “Top lad x,” he wrote. Sam Claflin, who shared the screen with Matt in Me Before You, said, “You absolute dish! Congrats brother.”
Reportedly, Matt had first met Angela at a Wizarding World event at Universal Studios in Orlando in January 2016. He also proposed to Angela in November 2016 just four months after her divorce from her husband was finalised.
Lewsi had been interested in acting since a very early age. Starting off with some minor roles, the actor made his debut with Some Kind of Life. After playing Neville for almost 10 years, Matthew had left fans utterly shocked with his drastic transformation. The actor has featured in films like Me Before You and Terminal after that. Lewis also played the character Jamie Bradley in a five-part BBC TV series called The Syndicate written by Kay Mellor.
Here’s wishing Matthew Lewis and Angela Jones a lifetime of happiness post their wedding.