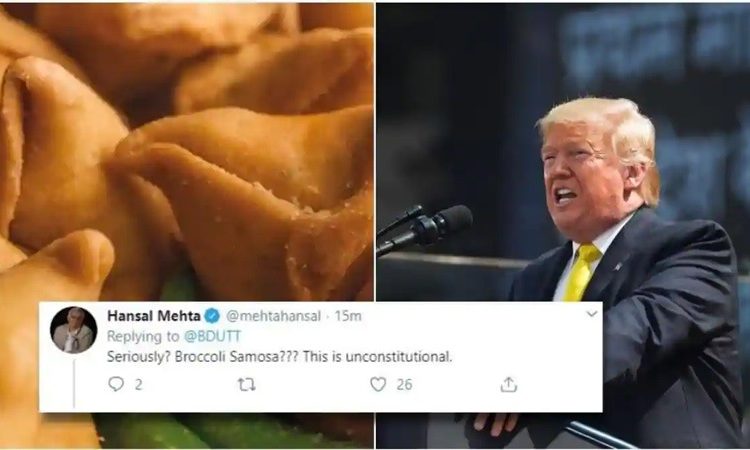 The internet is surely not missing being a part of the Namaste Trump event after reading what is on the menu. After the menu for high tea at Sabarmati Ashram went viral on Twitter, people are particularly repulsed by the idea of ‘broccoli samosas’.
US President Donald Trump and First Lady Melania are on a two-day tour of India. They landed in Ahmedabad on Monday morning where they were treated to a host of what Twitter has deemed ‘unimpressive’ dishes. The visitors and delegates were served broccoli and corn samosa, apple pie, kaju katli and a variety of teas to choose from, prepared by chef Suresh Khanna of Ahmedabad’s Fortune Landmark Hotel.
However, journalist Barkha Dutt tweeted that ‘nobody had the broccoli samosa’. Replying to her tweet, director Hansal Mehta wrote, “Seriously? Broccoli Samosa??? This is unconstitutional.”
“If you change a samosa’s fillings, you are playing with feelings! #BroccoliSamosa is NOT samosa. #AlooLoverForever,” wrote another Twitter user. “I have a horrible feeling the president will sulk big time after having Brocolli Samosa,” read another tweet. “Will Trump uncle be eating those broccoli samosas with chutney or Mayonnaise,” tweeted another.
Talking about preparing the menu, Khanna had said, “Tomorrow is an important day for all of us at Fortune Landmark Hotel. We have prepared a high tea menu for them. Khaman is a famous Gujarati delicacy. We will prepare light steam khaman for Donald Trump,” Khanna told reporters in Ahmedabad. “Other items include apple pie, broccoli and corn samosa, kaju katli and different types of tea, such as green and lemon tea,” he added.
A broccoli samosa may not be the end of Trump’s dietary troubles in India. US officials, who have dined on several occasions with Trump, seemed to be puzzled over the change in his diet during the 36-hour trip to India. Trump has a salad with a meal every now and then — but other than that, “I have never seen him eat a vegetable,” the official was quoted as saying by CNN. “I don’t know what he’s going to do in this case. They don’t serve cheeseburgers,” he added.
The President, whose diet is often a rotation of steaks, burgers, and meatloaf, may face a stark change in diet as he visits three Indian cities this week. Trump will sit for several meals with PM Modi when he is in India, including lunch and a formal banquet on Tuesday evening at ornate Rashtrapati Bhavan.
The countries visited by Trump earlier have often accommodated his diet, feeding him lamb or another alternative if steak is not on the menu, officials said. Even one of the President’s favourite fast-food restaurants, McDonald’s, does not serve beef in India.