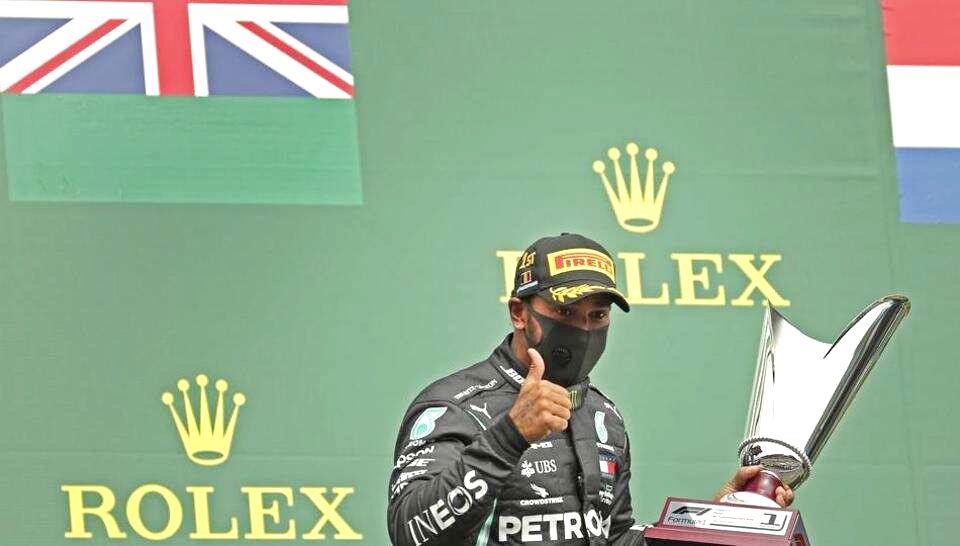 Mercedes driver Lewis Hamilton of Britain gives the thumbs up as he holds his trophy on the podium after placing first in the Formula One Grand Prix at the Spa-Francorchamps racetrack in Spa, Belgium, Sunday, Aug. 30, 2020. (AP)

SPA-FRANCORCHAMPS (Belgium), August 30: Lewis Hamilton led from start to finish at the Belgian Grand Prix to clinch his 89th career win and move two behind Michael Schumacher’s Formula One record on Sunday.
The world champion was untroubled from pole position, beating his Mercedes teammate Valtteri Bottas by eight seconds and finishing 15 seconds ahead of Red Bull’s Max Verstappen. Renault’s Daniel Ricciardo was fourth and grabbed an extra point for the fastest lap.
Hamilton’s fifth win from seven races also extended his championship lead over Verstappen to 47 points with Bottas drifting back in third. Hamilton is odds-on to win a seventh title to tie Schumacher’s record.
Schumacher won five of those F1 titles consecutively during a glorious era for Ferrari, but the proud Italian team is struggling badly now. Sebastian Vettel finished 13th and Charles Leclerc 14th.
They are not able to get anywhere close to Hamilton in terms of speed, let along challenge him.
Having secured a record-extending 93rd career pole, which he dedicated to American actor Chadwick Boseman, Hamilton made a clean start and Bottas was unable to exert pressure on the long straight up to Turn 2.
Early into the 44-lap race, Williams driver George Russell and Alfa Romeo’s Antonio Giovinazzi crashed heavily but were both unharmed.
McLaren driver Carlos Sainz Jr. failed to start because of an exhaust failure.
A minute’s silence was held before the race in memory of French driver Anthoine Hubert, who died here last year following a horrific crash during an F2 race.
F1 driver Pierre Gasly, who was close friends with Hubert, and other drivers gathered solemnly around a picture of Hubert on the grid. His racing helmet was placed on a stand. (AP)