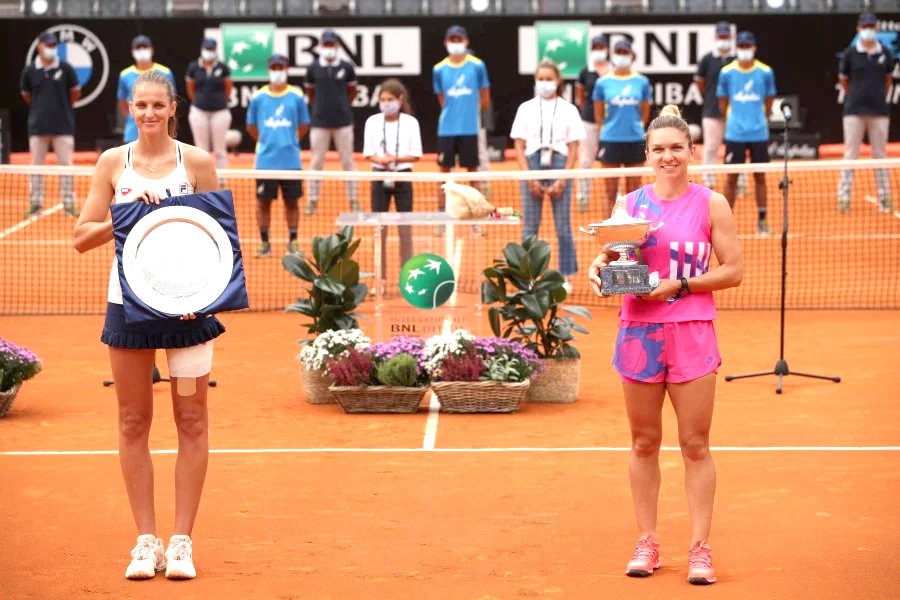 Tournament winner Romania's Simona Halep (R) and runner-up Czech Republic's Karolina Pliskova pose with their trophy after the final of the Women's Italian Open at Foro Italico on September 21, 2020 in Rome. - AFP pic

ROME, September 21: Top seed Simona Halep won her first Italian Open title on Monday after defending champion Karolina Pliskova retired while trailing 6-0, 2-1 in Monday’s final.
World number two Halep, 28, was competing in her third Rome WTA final, having finished runner-up in 2017 and 2018 on the clay at the Foro Italico.
Pliskova, the second seed, was playing with her left thigh bandaged, and required treatment on her lower back and upper leg after the first set which Halep swept in just 20 minutes.
The Czech lost her opening service game in the second set, but broke back immediately for 1-1 to claim her first game after half an hour.
But she called time in the third game, heading towards Halep to signify the end of the match.
Wimbledon champion Halep’s 22nd career title comes just a week before the start of the French Open which she won in 2018.
Halep extended her winning streak this season to 14 consecutive victories. She won the Dubai title in February, before the coronavirus lockdown, coming back to claim victory in Prague last month having skipped the US Open.
Former world number one Pliskova, now ranked four, had been having a successful week on clay after her disappointing second round exit in the US Open where she was the top seed.
Wawrinka splits from coach Magnus Norman
Stan Wawrinka announced on Monday that he was separating from his coach Magnus Norman “by mutual consent”, putting an end to eight years of collaboration during which the Swiss won his three Grand Slam tournaments.
Wawrinka, now 35, ranked as high as third in the world in 2014 when he won the Australian Open. He went on to win at Roland Garros the following year and the US Open in 2016.
“We have had an amazingly strong, enjoyable and hugely successful partnership,” Wawrinka wrote on Instagram of his bond with the Swedish coach.
“We reached the height of this sport together and I want to thank him for helping me win everything that I could ever dreamt of winning. He’s been a great coach, friend and mentor and will always be a dear friend.”
Wawrinka is one of the few to have broken the hegemony of the Big Three of Roger Federer, Rafael Nadaland Novak Djokovic — he and Andy Murray are the only players outside that trio to have won multiple Grand Slam events.
“Winning the grand slams has been a life changing experience for me and I could not have done that without him (Norman),” said Wawrinka, currently ranked 17 in the world. (AFP)