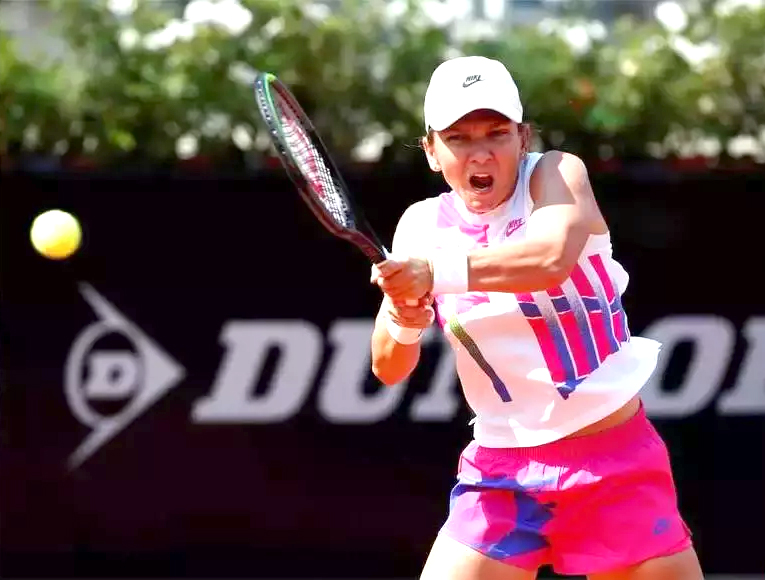 Rome, September 18: Top-seeded Simona Halep improved to 7-0 in tennis’ restart with a 7-5, 6-4 win over Dayana Yastremska on Friday to reach the Italian Open quarterfinals.
Halep, who is actually on an 11-0 run overall stretching back to February, recovered an early break in the opening set and then overpowered her 29th-ranked opponent the rest of the way.
Having won a title in Dubai before the coronavirus pandemic, Halep marked her return with another trophy in Prague last month. She then skipped the U.S. Open due to health concerns amid the pandemic.
Halep, who lost two straight finals in Rome to Elina Svitolina in 2017 and 2018, will next face either 10th-seeded Elena Rybakina or Yulia Putintseva.
Also on the red clay courts of the Foro Italico, defending champion Karolina Pliskova defeated Russian qualifier Anna Blinkova 6-4, 6-3 and will next play 11th-seeded Elise Mertens, who eliminated Montenegrin qualifier Danka Kovinic 6-4, 6-4.
In men’s action, 15th-seeded Grigor Dimitrov ended the run of 19-year-old Jannik Sinner with a 4-6, 6-4, 6-4 win.
Sinner, the Italian who had beaten third-seeded Stefanos Tsitsipas in the previous round, missed an easy overhead smash into the net on Dimitrov’s fifth match point.
“A loss like that hurts. But I’ll try to take the positive aspects out of it,” Sinner said. “That wasn’t the end I wanted.”
Matteo Berrettini, the big-serving Roman who reached last year’s U.S. Open semifinals, beat fellow Italian Stefano Travaglia 7-6 (5), 7-6 (1) in a match where both players had the same amount of winners (17) and unforced errors (28).
The tournament has been played without fans so far due to the pandemic, although the Italian government announced Friday that up to 1,000 spectators will be allowed in to watch the semifinals and finals.
“Starting with the semifinals and finals of the (Italian Open), up to 1,000 spectators can watch all sports competitions that are held outdoors and which scrupulously respect the rules in terms of social distancing, masks and reserved seating,” Sports Minister Vincenzo Spadafora said. “It’s a first, but significant, step toward the return of normalcy in sports.”
The semifinals and finals for both men and women are scheduled for Sunday and Monday.
The tournament was rescheduled from its usual slot in May because of the pandemic. (AP)